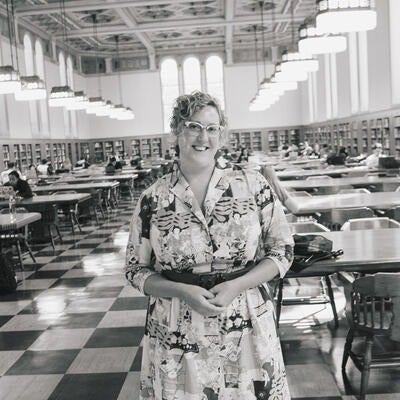 Rebecca Corbett’s research interests include the history and practice of Japanese tea culture (chanoyu), and early modern Japanese women’s history. In particular, her work has focused on reevaluating the role of women as practitioners and producers of Japanese tea culture historically. Her book Cultivating Femininity: Women and Tea Culture in Edo and Meiji Japan (University of Hawai’i Press, 2018) analyses privately circulated and commercially published texts to show how tea practice for women was understood, articulated, and promoted from the eighteenth through early twentieth centuries. Her current project is a biographical study of the Buddhist nun and artist Tagami Kikusha (1753-1826). This work will examine both her life in the eighteenth-nineteenth centuries, and the transmission of her work in modern Japan. Other interests include the role of traditional culture in modern Japan, and in shaping ideas about Japan internationally.

Rebecca Corbett's role as Japanese Studies Librarian at USC includes selecting and managing print and digital collections in Japanese; and providing reference and liaison services to support research, teaching, and learning in Japanese Studies. As an historian, Dr. Corbett works particularly closely with faculty and students to build on our strength in the study of premodern history, religion, and culture through the Project for Premodern Japan Studies. She also works with colleagues in Special Collections to manage Japanese rare books housed at USC Libraries and has a particular interest in the history of the book as a material object in East Asia.

Dr Corbett is an affiliate faculty member of the USC Shinso Ito Center for Japanese Religions & Culture and works with them to plan and host events of interest to the Japanese Studies community at USC. She is also a member of the Council on East Asian Libraries Committee on Japanese Materials (2020-2023) and Librarian Representative on the North American Coordinating Council on Japanese Library Resources (2020-2023).