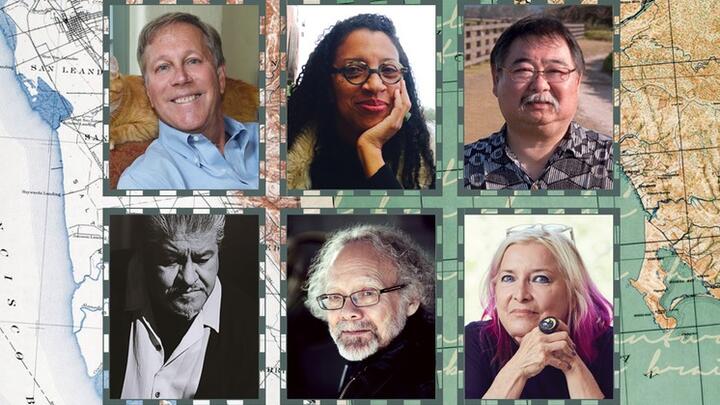 Cartography of Poets: Maps, Archives, and Locating the Poetic

This event will be livestreamed.

DESCRIPTION:
The USC Libraries are home to archives of California poets who have influenced literary art around the globe. Some have taken inspiration from California’s geology and geography, some from its diversity of communities, and others from the regional interplay of formal poetic structures and experimental techniques. All embody aspects of California-ness that are present in the archives.

Dana Gioia was the Poet Laureate of California from 2015–2018. An internationally recognized poet and critic, he is the author of five collections of verse, including Interrogations at Noon (2001), which won the American Book Award, and 99 Poems: New & Selected (2016, which won the Poet’s Prize). His critical collections include Can Poetry Matter? (1992), which was a finalist for the National Book Critics Award. He has also written three opera libretti and edited twenty literary anthologies. Gioia served as Chairman of the National Endowment for the Arts from 2003 to 2009.

Garrett Hongo was born in Volcano, HawaiʻI, and grew up on the North Shore of Oʻahu and in Los Angeles. His work includes Coral Road: Poems and two other books of poetry, three anthologies, Volcano: A Memoir of Hawaiʻi, and The Mirror Diary: Selected Essays. Among his honors are a Guggenheim Fellowship, Fulbright Fellowship, two NEA grants, and the Lamont Poetry Prize from the Academy of American Poets. In 1989, he was a finalist for the Pulitzer Prize. He’s currently at work on two books: The Ocean of Clouds and The Perfect Sound: An Autobiography in Stereo.

Robin Coste Lewis is the poet laureate of Los Angeles. In 2015, her debut poetry collection, Voyage of the Sable Venus, won the National Book Award in poetry. Lewis’s writing has appeared in various journals and anthologies, such as Time, New Yorker, New York Times, Paris Review, Transition, and Best American Poetry. Lewis is currently at work on two new collections, To the Realization of Perfect Helplessness and Prosthetic. She has received fellowships and awards from the Guggenheim Foundation, the Los Angeles Institute for the Humanities, and was named an “Art-of-Change” fellow by the Ford Foundation.

Luis J. Rodriguez sees poetry as prayer in motion. He has 16 books in all genres, including limited edition, handmade art books. He’s best known for the memoir Always Running, La Vida Loca, Gang Days in L.A. and its sequel, It Calls You Back: An Odyssey Through Love, Addiction, Revolutions & Healing. Luis is founding editor of Tia Chucha Press, now active for over 30 years. From 2014–2016, Luis served as Los Angeles’ official Poet Laureate. His latest book is From Our Land to Our Land: Essays, Journeys & Imaginings of a Native Xicanx Writer.

David St. John has been honored with many prizes over his career, including both the Rome Fellowship and the Award in Literature from the American Academy of Arts and Letters; the O.B. Hardison Prize from the Folger Shakespeare Library; and the George Drury Smith Lifetime Achievement Award. He is the author of twelve collections of poetry, most recently, The Last Troubadour: New and Selected Poems; as well as a volume of essays, interviews, and reviews entitled Where the Angels Come Toward Us. St. John is University Professor and chair of English at USC.

Gail Wronsky is the author, coauthor, and translator of twelve books of poetry and prose, including the poetry collections Imperfect Pastorals (2017); Poems for Infidels (2005); and Dying for Beauty (2000, a finalist for the Western Arts Federation Poetry Prize). Under the Capsized Boat We Fly, her new and selected poems, will be published in 2021. She has an MFA from the University of Virginia, a PhD from the University of Utah, and is the Daum Professor at Loyola Marymount University in Los Angeles.

Presented by USC Visions and Voices: The Arts and Humanities Initiative. Organized by the USC Libraries in partnership with the USC School of Dramatic Arts and the Sidney Harman Academy for Polymathic Study.