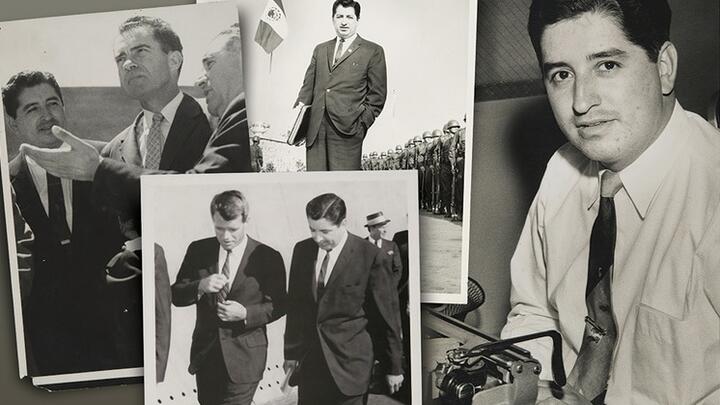 Join us for an evening of performance and conversation honoring the life and work of Ruben Salazar (1928–1970), a pioneering journalist of Mexican descent who was among the first to cover the burgeoning Chicano movement in the 1960s, opening doors for Latinx journalists, newspapers, and broadcast media in Los Angeles and across the United States. Celebrated actors Marlene Forte (Knives Out, Fear the Walking Dead, Real Women Have Curves), Matthew Lillard (Good Girls, Bosch), Culture Clash co-founder Herbert Sigüenza (Coco), and David Zayas (Dexter, Gotham, Oz, Rounders) will perform in a short play by Los Angeles-born Mexican American playwright and USC professor Oliver Mayer, author of Blade to the Heat. The play is inspired by writings preserved in the Ruben Salazar Papers, donated by his family to the USC Libraries' Special Collections.

Presented on Salazar’s birthday, the performance will be followed by a conversation with the actors and USC professors Elda María Román and Roberto Suro about Salazar’s legacy, his untimely death 50 years ago during the Chicano Moratorium protests, and continuing struggles for social justice today. The Latin GRAMMY–nominated Trio Ellas will also perform a musical program celebrating Salazar’s life.

In conjunction with the event, an exhibition of items from the Ruben Salazar papers will be presented in Doheny Memorial Library.