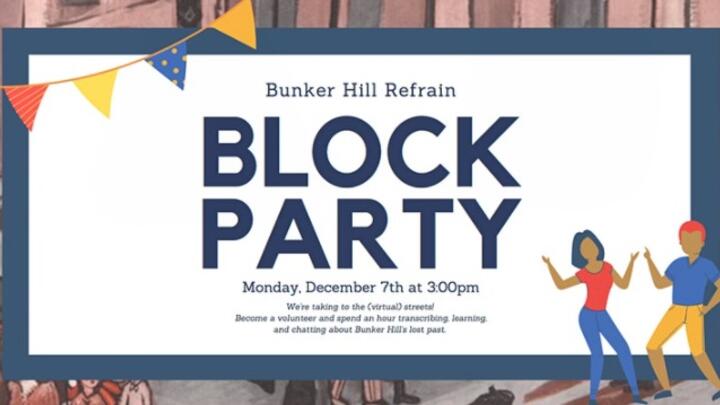 We're taking to the (virtual) streets! Be a volunteer and spend an hour transcribing, learning, and chatting about Bunker Hill's lost past.

Bunker Hill Refrain focuses on a neighborhood in downtown Los Angeles with a deep and storied history. Subdivided in 1867, Bunker Hill was originally home to the city’s most distinguished residents. As Los Angeles grew, a diverse mix of families, seniors and low-wage workers replaced the early settlers. At the midpoint of the twentieth century, planners and policy makers argued that the area was blighted and should be remade to suit the aspirations of a city on the move.

With the establishment of the Bunker Hill Urban Redevelopment Project in 1958, the hill and the housing on top of it was demolished to make way for high-rise towers and cultural institutions. More than 6,000 individuals were displaced.

Scholarship has linked the redevelopment of Bunker Hill to national housing policies, cold war politics and the desire of local elites to shape the image of the city. Significantly less is known about the individuals and families who occupied the neighborhood before the bulldozers arrived.

The aim of this project is to deepen our understanding of the demographics of Bunker Hill by making use of household survey cards compiled by the Works Progress Administration in 1939 and housed in Special Collections at USC Libraries. These cards contain valuable, and as yet untapped, information about the inhabitants of Bunker Hill dwellings, including their ownership status, length of residence, rent, race or ethnicity. The resulting searchable data from this project will become a valuable resource for scholars from numerous disciplines