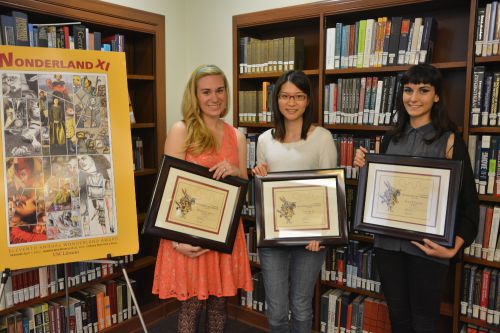 Martzi Campos and Yuting Su took first prize in the eleventh-annual USC Libraries Wonderland Award competition for “Curiouser and Curiouser!” Judges chose the interactive book from an array of imaginative submissions by students from USC and other participating institutions around Southern California. Forty-five students in total participated in the competition.
Campos and Su are MFA graduate students in the School of Cinematic Arts Interactive Media and Games department. “Computers are the new Wonderland of the 21st century, and we wanted to make ‘Curiouser and Curiouser!’ the rabbit hole to this Wonderland,” they said in accepting the award at a ceremony in Doheny Memorial Library on Friday, April 24. “We tried to blend the lines between digital and physical games, keep the joy of reading books, and create an innovative, playful way to explore Lewis Carroll’s classic story.”
Their work, a clever combination of digital sensors and analog construction, delighted the judges with its sense of play. The reader-player is required to interact with the pop-up book and an adjacent computer screen to solve a variety of puzzles.
Judges Andrew and Lindsey Woodham congratulated the pair at the ceremony, describing the project as “combining the whimsy of a pop-up book with hands-on digital Carrollian gaming in a way that truly captured the spirit of Lewis Carroll and the Wonderland Award.” “Curiouser and Curiouser!” debuted in March at the Game Developers Conference in San Francisco.
Second-place prize went to USC Roski School of Art and Design junior Tena Keleman, for “Brailltography Book.” The multilayered piece combines two 19th-century invented alphabets, one designed by Frenchman Louis Braille for the blind, the other by Lewis Carroll, who created nyctography as a way to write in the dark. The entry also features puzzles and riddles that require the viewer to interact with the new alphabet to reveal the answers.
In welcoming the crowd to the ceremony, Dean Catherine Quinlan of the USC Libraries recognized the inspirational support of the annual competition’s founder, Linda Cassady.
“It was Linda’s vision and generosity that brought the Wonderland Award into being more than a decade ago,” Quinlan said. “Her passion—not to mention her generous support of the prizes—has more than any other factor transformed this competition into an inimitable and much-anticipated part of academic and social life at USC.”
Several judges in addition to award sponsor Linda Cassady assessed the submissions: Angela Diamos, an Associate Professor of Animation?in the School of Media, Culture & Design?at Woodbury University; sculptor Karen Mortillaro; USC Masters in Professional Writing lecturer Richard Rayner; and Andrew and Lindsey Woodham, both three-time prizewinners of the Wonderland Award.
The Wonderland Award is an annual multidisciplinary competition showcasing the creative and interpretive talents of students from USC and other Southern California institutions as they transform the life and writing of Lewis Carroll into new creative and scholarly works. All student submissions become a permanent part of the G. Edward Cassady, M.D., and Margaret Elizabeth Cassady, R.N., Lewis Carroll collection, which George Cassady donated to the USC Libraries in 2000 and from which students draw inspiration and raw material for their Wonderland entries. The libraries have published a series of anthologies—titled the Liddell Books and available at the USC bookstore—highlighting the submissions.
This year’s Wonderland Awards coincide with worldwide celebrations in commemoration of the 150th anniversary of the publication of “Alice’s Adventures in Wonderland.” For more information about the award and the Cassady Lewis Carroll Collection, visit www.usc.edu/libraries/wonderland.