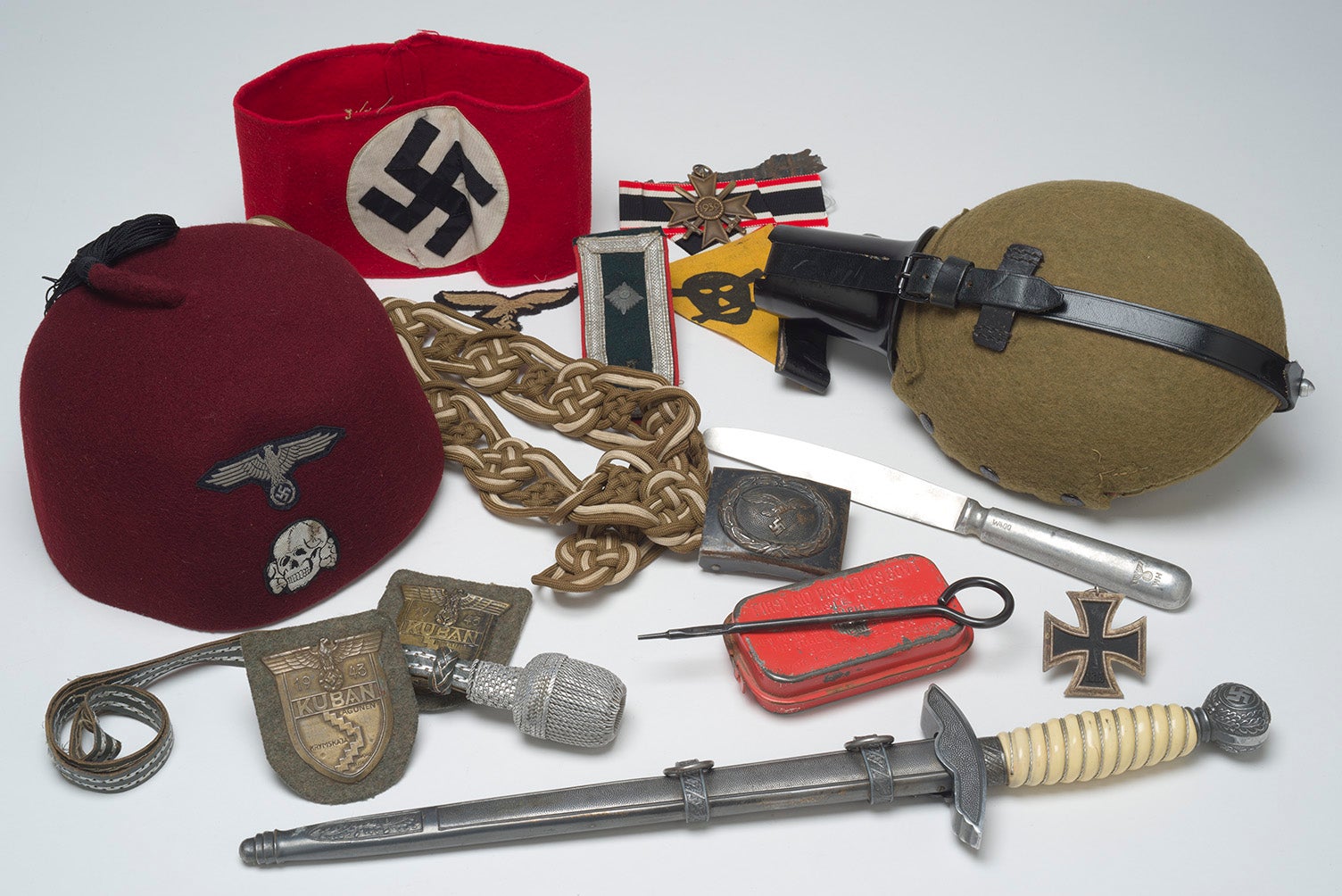 A rare collection containing hundreds of artifacts and written material brought back from Nazi Germany by an American Jewish soldier has been acquired by the USC Libraries as part of a longstanding collaboration with the USC Shoah Foundation’s Center for Advanced Genocide Research.

In addition to a large series of intricately detailed letters, the collection donated by David and Andrea Stanley includes Nazi flags, medals and other insignia, newspapers, brochures, photographs, yellowed copies of the Stars and Stripes military newspaper, and even shattered pieces of the swastika from atop the Nuremberg Stadium that was famously blown up by American forces at the end of the war.

While many people returned from the war with mementos, what sets this collection apart from most others is that these pieces of history were meticulously documented by the man who gathered them: Andrea Stanley’s father, Harry K. Wolff, Jr.

Not only did Wolff write descriptions of where and when he found a particular piece — even going so far as to count his steps as he walked through an area — he often took pictures at the scene, giving researchers a rich and verifiable inventory.

“We gladly took this collection because in every letter, Lt. Wolff told his new wife, Natalie Rosow, where he got the artifacts from and how he got them and what they mean, which is unusual,” Wolf Gruner, the Founding Director of USC Shoah Foundation’s Center for Advanced Genocide Research and the Shapell-Guerin Chair in Jewish Studies said. “In addition, Lt. Wolff took photographs and sent home detailed descriptions about everything he witnessed from his training in the United States to his arrival in England, the invasion at Normandy and his experiences at both Ohrduf and Dachau.”

The Harry K. Wolff, Jr. WWII collection joins a quickly growing wealth of Holocaust-related material at USC. In addition to the 54,000 testimonies in USC Shoah Foundation’s Visual History Archive, they include the USC Libraries’ Holocaust and Genocide Studies Collection with 20,000 primary and secondary sources; and the Feuchtwanger Memorial Library, which houses one of the largest collections in the U.S. of private papers of German and Austrian exiles who escaped the Third Reich and found refuge in California.

Expanding USC’s research resources for Holocaust and genocide studies has been a goal of Gruner’s since the Center was created in 2014. World War II materials now accessible for researchers and students include diaries, letters, books, magazines, period telephone books and even a full set of the original transcript of the Nuremberg trials that took place at the end of the war.

During his travels through war-ravaged Europe, Lt. Wolff faced many obstacles that seem minor today, but were difficult to overcome at the time: Ink could be in short supply and he often had to keep his activities a secret, even as he wrote his wife nearly every day while he was away.

Wolff was a 30-year-old lawyer when he entered the war— older than the average soldier. As a member of Patton’s 3rdArmy, his Anti-Aircraft unit was attached to the 1st Army for the D-Day Invasion under General Bradley, and he was often called upon to serve as a Judge Advocate in Military Tribunal Hearings.  Following VE-Day he spent three months living at the Dachau concentration camp when it was an SS prisoner of war camp operated by the US Army that held as many as 31,000 Nazi and SS troops, any of whom were awaiting trial for war crimes.

Like many people of that era, he rarely spoke about his experiences during the war. It wasn’t until after he died that his daughter and son-in-law began to realize the importance of his collection.

“He called it junk,” said Andrea Stanley. “I called it stuff. USC calls it a collection.”

Another unusual aspect of the collection is that it remained in one place for 70 years.

“That’s very rare,” said Michaela Ullmann, Assistant University Librarian and Exile Studies Librarian. “Often the family gets it and one person takes this, another takes that, and then the rest goes to a museum.”

Andrea’s mother numbered each of the hundreds of letters, and the Stanleys spent years sifting through it all and documenting what they found in a 41-page catalogue summarizing the contents of each of the letters.

“Some of the references in the letters are particularly interesting when you consider them in the context of history,” Andrea Stanley said. “There were no ballpoint pens at the time, so everything is written in fountain pen, and my mother was sending him bottles of ink. It’s hard for me to imagine my father, marching across Europe with Patton’s 3rd Army, shooting down planes, sleeping in the mud and fighting on the front lines.”

Despite the difficult conditions, he was careful to protect his wife from the harsher realities of war. Although he wrote about what he saw, he also filled the missives with love notes, holiday wishes, comments about news from friends and other relatives, and his non-battle activities including his efforts to observe Jewish High Holy Day services and celebrate with other soldiers at the first Passover service conducted in Germany since the start of WWII.

He was trying to protect my mom, so he tried to keep things light,” Andrea said. “He writes about the bitter cold but says he’s not going to wear his winter coat until the rest of the men receive theirs. That was my Dad.”

Among the more interesting artifacts and corresponding provenance are the fragments from the iconic swastika above Hitler’s Box at the stadium at Nuremburg. He writes in a letter that he is sending home pieces of the swastika that was blown up on Patton’s orders.

He also painted a stark contrast between how different people reacted to the end of the war.

“He talks a lot about the difference between the reception they received in France where the streets were lined with people cheering, waving flags and running up to give them flowers, “Andrea said. “But when they arrived in Germany, they were greeted by people mostly glaring at them in silence. He even tells a story about one child cheering their arrival and his mother’s angry response.”

The Harry K. Wolff, Jr. Papers are housed in USC Libraries’ Special Collections and are open to the public for research. A detailed finding aid is available at http://archives.usc.edu/repositories/3/resources/2636.