'Collecting the Cosmos' at the USC Libraries on Jan. 24 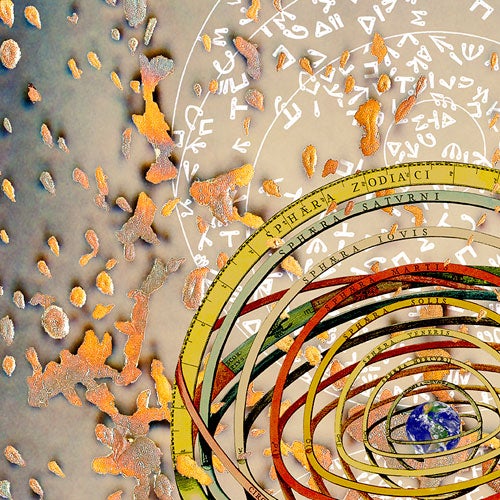 Collecting the Cosmos features several unique and innovative creations, along with rare items from the USC Libraries' Special Collections. Hidden Light, a participatory art installation from Dan Goods of NASA's Jet Propulsion Laboratory (JPL), simulates the method scientists use to search for planets outside our solar system. Ten original works by local artists Victor Raphael and Clayton Spada remix themes of space and time, folklore and religion, quantum mechanics and microbiology, while incorporating graphical elements from library materials. An interactive experience developed by the USC Institute for Creative Techologies transports viewers millions of miles away to the surface of Mars. Photographs from the Hubble Space Telescope reveal the stunning beauty of our universe's distant reaches. And selections from the libraries' Special Collections trace humanity's attempts to make sense of the night sky.

The USC Libraries host a reception for Collecting the Cosmos on January 24 at 5:30 p.m in Doheny Library's Ground Floor Rotunda. Light refreshments will be served at the reception, which is free and open to the public. RSVP online.

Preceding the reception will be a conversation among JPL's Dan Goods and David Delgado, and USC professors Clifford Johnson and Holly Willis, in Doheny Library's Friends Lecture Hall (Room 240). The discussion is currently at capacity, but USC students, faculty, and staff may sign up for the waitlist here and members of the general public here.

Collecting the Cosmos is sponsored by Visions & Voices: The USC Arts & Humanities Initiative. The exhibition runs through May 31, 2014.