The Constance McCormick Collection at the Cinematic Arts Library is an archive of print articles, photos, and reviews that span motion-picture history. Clippings and articles contained within respective scrapbooks tell the chronological stories of individual film actors‘ lives and careers. Film reviews prior to 1966 also are contained within the collection. (Post-1966 reviews are located in the Cinema Library‘s clipping files). Constance McCormick conceived and began this undertaking in 1934, originally as a fan herself, and continues to add to the collection today. McCormick donated the collection to the university in memory of her father, Lucien Littlefield, whose acting career spanned 47 years until his death in 1960. 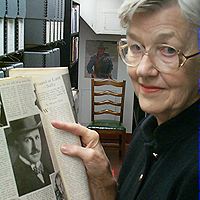 (News article for USC News from 2004 by Eric Mankin)

A woman's print collection from Hollywood's Golden Age and beyond gives researchers a glimpse of filmdom's history. The valuable archive, housed in USC‘s Doheny Library, offers a window into American pop culture.

For Constance McCormick-Van Wyck, the story began in 1934, on a long train ride from Los Angeles to see the Chicago World's Fair.

At a stop, Van Wyck‘s mother, a journalist, gave her the then gigantic sum of $1 to buy an armload of screen magazines. These were magazines that Van Wyck‘s mother had written for, and that often featured stories about Connie‘s father, Lucien Littlefield, a well-known character actor who Connie‘s mother had met while interviewing Rudolph Valentino on the set of The Sheik (the couple were married soon after meeting).

Van Wyck devoured the magazines. She then carefully clipped numerous photos and articles of interest. At the end of her visit to the fair, she says, "I came home with 40 pounds of excess baggage, and I was hooked."

Van Wyck has continued to add to her collection for more than 72 years since that train ride. The fruits of her years of preservation now fill many long rows of file cabinets in the stacks of USC‘s Cinematic Arts Library. Constance donated the sizable collection to the university on her 40th birthday, Nov. 2, 1966. In 2002, she and her late husband, the Reverend Canon William Van Wyck, pledged $10,000 to USC, part of which was used to purchase new display cases for the still-expanding collection.

Van Wyck continues to make bimonthly trips from her Orange County home to the library, adding the latest news to the Constance McCormick Collection. The collection has grown to many thousands of items, offering film students and scholars a unique window into not just film history, but 20th-century American popular culture in general.

"Connie's scrapbooks feature almost every newspaper and magazine article done about individual actors and actresses from the 1930s to the present time," says Cinematic Arts Head Librarian, Stephen L. Hanson. The collection also includes thousands of film reviews that offer a clear picture of how a given movie was received during its initial release.

Indexed by subject, and meticulously filed, the clippings are a prime resource for USC.

For the most part, the old reviews are not available electronically. They would otherwise need to be retrieved by tracking down the original publications- a laborious and perhaps impossible task, since many of these publications no longer exist.

Thus, while the world of popular film culture has changed with the advent of the World Wide Web, Van Wyck knows that her role has not lost its value, especially given the convenience and accessibility of her collection.

Librarian Steve Hanson agrees. The Internet has electronic search engines, such as Google and Yahoo, he says, "but Connie's scrapbooks are actually easier for students to use because everything is right there in one place."