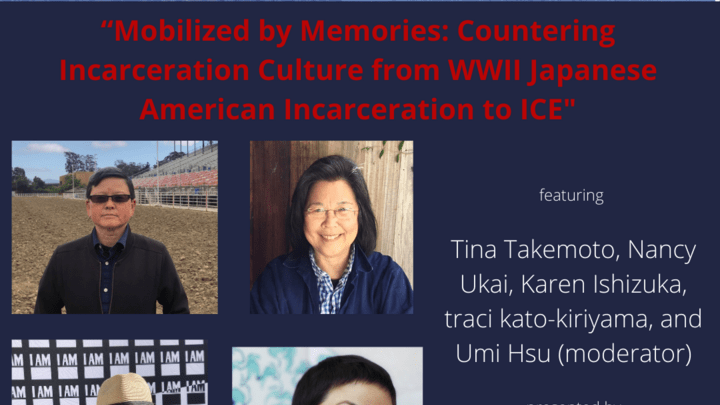 This panel, put on in partnership with In Plain Sight, explores the various practices and strategies used by Japanese American artists, scholars, and community organizers to protest state violence and represent the history of Japanese American incarceration by the U.S. government during World War II. The panelists will speak to movement-building, direct action, art practice, and archive interventions as acts of resistance against white supremacy and an American culture of incarceration. This program draws connections between WWII Japanese American incarceration and the present calls to abolish all forms of immigrant detention. What is the relationship between the artist, community, and archive? How do artists use historical objects to make the invisible, visible? How can cultivating collective memory lead to political consciousness and mobilization?

“Mobilized by Memories: Countering Incarceration Culture from WWII Japanese American Incarceration to ICE" will take place on Zoom. You can register HERE. This event is organized by ONE Archives at the USC Libraries Curator, Alexis Bard Johnson with assistance from Addy Zou.

traci kato-kiriyama is a writer/actor and one half of the award-winning PULLproject Ensemble; director/co-founder of Tuesday Night Project - presenter of the Tuesday Night Cafe series (currently the longest-running Asian American-produced mic series in the country);  and Writ Large Press author of a new book still in the birthing process.  She has been presented as a performer, poet, theatre deviser, guest lecturer, speaker, facilitator, emcee, and Artist-in-Residence at innumerable venues from Los Angeles, San Francisco, Washington and Hawai'i to Philadelphia, Florida, New York and Toronto.

Nancy Ukai is a sansei whose family members were incarcerated at Tanforan and Topaz. She is project director of the website, “50 Objects/Stories of the American Japanese Incarceration,” a National Park Service JACS grant project. She helped lead a successful social media protest against the Rago auction of the Eaton collection of camp artifacts in 2015 and is researching their provenance as an advisor to the Japanese American National Museum. Her interest in the roots of issei culture deepened during 14 years of living in Japan. She is on the board and is a former co-president of the Berkeley JACL and formerly served on the board of the Nisei Student Relocation Commemorative Fund. Childhood memories inform her participation in Tsuru for Solidarity, including working in her father’s grocery in Oakland, California, which donated to the Black Panthers breakfast program, and accompanying her mother to Alcatraz with a group of Japanese American activists who took canned food and water to the Indian occupiers of the island in 1969.

Karen L. Ishizuka is chief curator at the Japanese American Museum. She is also the author of Serve the People: Making Asian America in the Sixties (2015), Lost and Found: Reclaiming the Japanese American Incarceration (2006), and co-editor of Mining the Home Movie: Excavations in Histories and Memories (2008). An award-winning documentary writer/producer and museum curator who helped establish the Japanese American National Museum in Los Angeles, she received a Master’s Degree in Social Work from San Diego State University, and a Ph.D. in anthropology from the University of California, Los Angeles. A third-generation American of Japanese ancestry, Ishizuka lives in Culver City, California with her husband, filmmaker Robert A. Nakamura and has two children and three grandchildren.

Umi Hsu (moderator) is the Director of Content Strategy at the ONE Archives Foundation, Inc. Umi is a public humanist and strategic designer with research and organizing agendas for equity in arts, technology, and civic life. Prior to joining the ONE Archives Foundation, Umi served as the Digital Strategist of the City of Los Angeles Department of Cultural Affairs. With a PhD in Critical and Comparative Studies in Music from the University of Virginia, Umi is a sound ethnographer and artist whose practice is driven by inquiries about sound and migratory communities. Umi is also an adjunct faculty member at ArtCenter College of Design’s Media Design Practices MFA program and University of Southern California Marshall School of Business, and has published extensively on digital media, data, and Internet culture.