Birds of No Nation: Afghan Women on Art, Gender, Freedom, and Exile Conversation 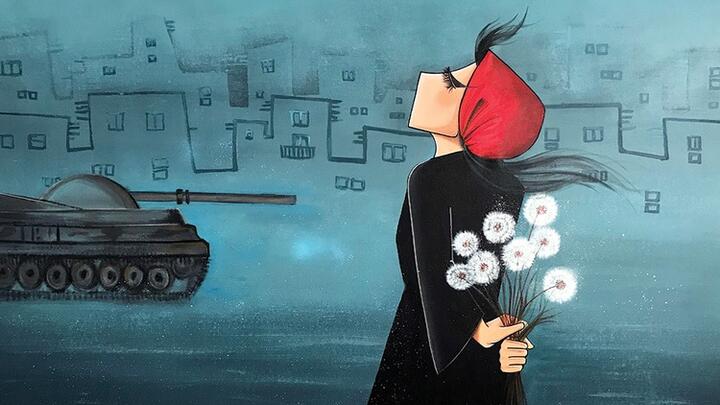 Birds of No Nation: Afghan Women on Art, Gender, Freedom, and Exile Conversation

Birds of No Nation: Afghan Women on Art, Gender, Freedom, and Exile
Workshop and Conversation

In the afternoon, artists, activists, and all supporters of human rights are invited to make public art with Hassani, known for her mural series Birds of No Nation, which explores Afghan refugee and migration experiences, and Samizay, whose photo and video work examines the contradictions of culture, nationality, and gender. Supplies will be provided, and no experience is necessary.

That evening, join Hassani, Samizay, and renowned journalist and human rights activist Najiba Ayubi for an inspiring conversation about art, creativity, and politics in light of women’s experiences in Afghanistan and global struggles for women’s equality and civil rights. The discussion will be moderated by USC Dornsife professor of political science Eliz Sanasarian and USC Roski School of Art and Design Vice Dean and professor Sherin Guirguis.

Prior to the event, the USC community will be able to stream the documentary films Ghosts of Afghanistan and Afghan Women: A History of Struggle via the USC Libraries.

Bios:
Working under anonymous threats and attacks from government entities for her reporting on politics and women’s rights, award-winning journalist Najiba Ayubi is an Afghan journalist and activist for human rights and freedom of the press with over two decades of experience. As managing director of The Killid Group, she leads a team of reporters working in print, broadcast, and online media that includes two of the country’s most popular magazines (Killid Weekly and Mursal Weekly) and 11 radio stations with a total of 12 million listeners. She has refused calls for censorship and is passionate about independent media.

Sherin Guirguis is an associate professor of art and Vice Dean of Faculty at the USC Roski School of Art and Design. Her work juxtaposes the reductive Western language of minimalist aesthetics with that of Eastern ornamentation and attempts to problematize the history of decoration and ornamentation and its relationship with social structures, cultural identity, and women’s agency. She has had solo exhibitions at The Third Line Gallery, Dubai; the Scottsdale Museum of Contemporary Art, Scottsdale; Gallery Wendi Norris, San Francisco; and LAXART, Los Angeles, and been awarded grants and fellowships including the 2014–15 City of Los Angeles Individual Artist Fellowship, the 2012 California Community Foundation Visual Artist Fellowship, and the Investing in Artists Grant from the Center for Cultural Innovation.

Shamsia Hassani is one of Afghanistan’s first female street artists. Working in Kabul, Hassani depicted Afghan women as strong independent figures who pursue their ambitious goals,  affirming and revealing their power and desire for joy, color, and beauty in their lives. After the Taliban takeover, she left her position as a lecturer in fine arts at Kabul University and sought refuge abroad. Organizing graffiti festivals, art classes, and exhibitions around the world, she has encouraged Afghans to express their creativity. During her 2016 residency at the Hammer Museum, Hassani painted a mural in the West Adams district of Los Angeles.

­Born in Kabul, Afghanistan, and raised in rural Washington state, Gazelle Samizay makes art that often reflects on the complexities and contradictions of culture, nationality, and gender through the lens of her bicultural identity. Her work in photography, video, and mixed media has been exhibited across the United States and internationally, including at Whitechapel Gallery, London; Los Angeles Municipal Art Gallery; the California Museum of Photography, Riverside; the de Young Museum, San Francisco; the Asian Art Museum, San Francisco; and the Slamdance Film Festival, Park City. Her pieces are part of the permanent collections of the Los Angeles County Museum of Art; the Center for Photography at Woodstock, New York; and En Foco, New York.

Eliz Sanasarian is a professor of political science, research associate at the Center for Religion & Civic Culture, and faculty associate in the Gender Studies Program at USC. She is the author of Religious Minorities in Iran, The Women’s Rights Movement in Iran: Mutiny, Appeasement, and Repression in Iran, and its edited Persian translation, which won the first prize as the Best Research Book on Women in Iran. She has received various awards, including USC’s President’s Circle Faculty Award for outstanding merit in the areas of teaching, research, and service; the University’s Remarkable Women Award by the Women’s Student Assembly; and the university’s highest honor, the Associates Award for Excellence in Teaching.