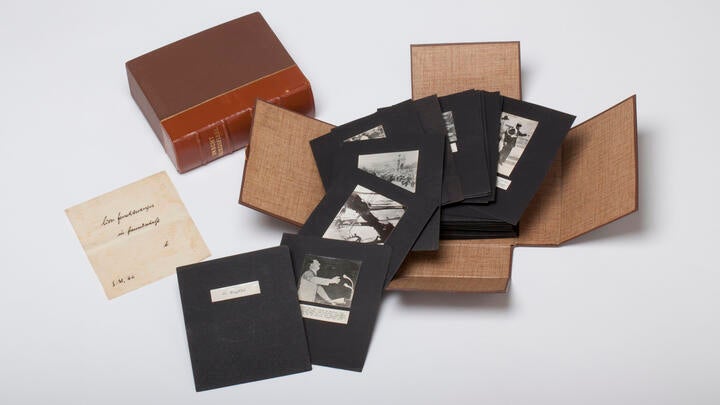 In December 1944, Brecht and his collaborator, Ruth Berlau, assembled the photoepigrams into this small-format Kriegsfibel. The collection contains seventy-one photoepigrams mounted on hand-cut sheets of black construction paper, with page numbers written by Brecht on the verso of each sheet. Also included is a title page and dedication sheet on onionskin paper. The pencil lines for marking the paper and the ragged hand-cut edges of the photographs are still visible. It is quite likely that Berlau herself reproduced the photographs from images that Brecht found in various publications, including Life Magazine and Swedish and American newspapers.
In 1944 Brecht presented this miniature copy of the Kriegsfibel to Lion Feuchtwanger, his longtime friend, mentor, and collaborator and a fellow German exile living in Southern California. Brecht sent another copy to his friend Karl Korsch in February 1945; whether additional copies were created or still exist is unknown.

In 1949, after Brecht returned to Germany, he and Berlau assembled the Kriegsfibel for publication; it did not appear, however, until the fall of 1955. The published work does not duplicate Brecht's smaller format but instead re-creates the manuscript now located at the Brecht Archive in Berlin. Both the 1954 and 1994 versions were enlarged to two and a half times the size of the Feuchtwanger version.