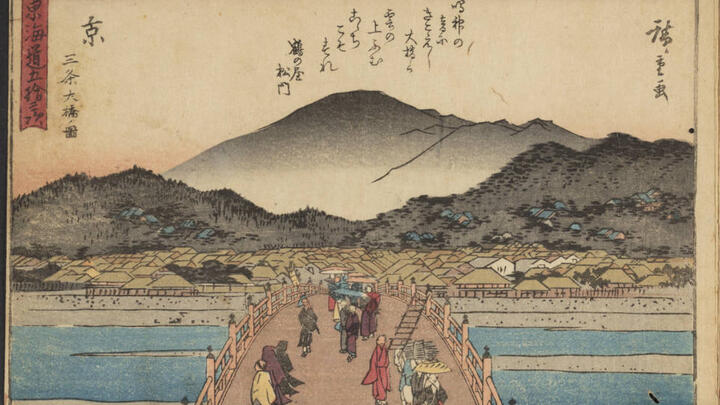 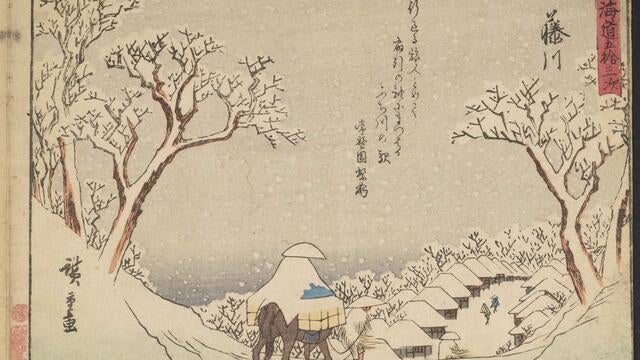 Andō Hiroshige (1797-1858) is the most celebrated Japanese woodblock print artist of the early modern period, and his 53 Stations of the Tokaidō is among his most famous works. In 56 prints, it depicts life along the stations (or post towns) on the Tokaidō highway, as well as the starting and end points. The Tokaidō was used to move people and goods between Edo (present day Tokyo) and Kyoto, and in the 18th and 19th centuries was a bustling highway.

Hiroshige created several different series of Tokaidō prints. In this series, each print has a comic poem (kyoka), hence this edition is known as the Kyoka Tokaidō. It is likely that the poems were composed by members of a group who gathered regularly to exchange verse, they may even have commissioned this particular series of Tokaidō prints and had them bound as books to commemorate a particular event.

Scroll through other sample pages in the gallery below and see the digital exhibit on Japanese Book History: A View from USC Libraries for information about this and other items from our collection.