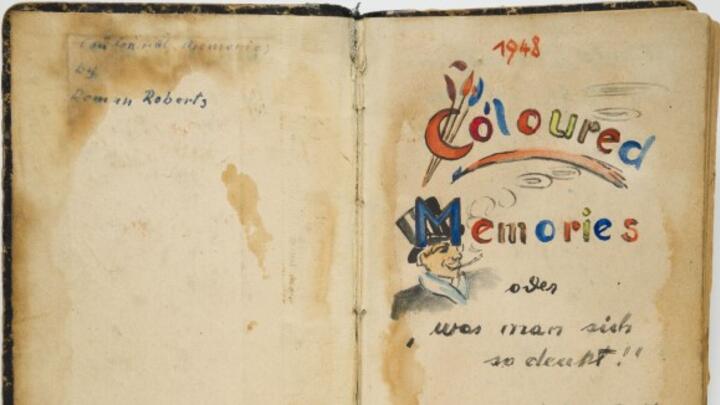 USC Libraries' Special Collections acquired a unique and colorful notebook by a German American soldier titled “Coloured Memories” in November of 2019. The notebook, created in 1948, contains original verse and notes accompanied by vibrant pen-and-ink and watercolor illustrations documenting the soldier's travels and eclectic musings on politics, love, folklore, and liquor.

The author of the notebook generally signs himself “Roman,” but also as “Roman Roberts” and “Roman Robert Söllner.” Ancestry.com includes a number of records for a Roman Robert Söllner (1925-1995) born in Germany and naturalized as an American citizen in Cleveland at the age of 36. That the author of this notebook is German American seems highly likely based on fluency in both languages and the European style of handwriting. Söllner may have been stationed in North Africa, given his satirical depictions of “Moors” along with drawings of minarets, “Raki” (a Turkish liquor), and drinking brandy under the moonlight by the Nile River. The notebook also includes several other illustrations, quick sketches of people dancing, a few portrait studies, and some lists and names of contacts, mostly in the United States.