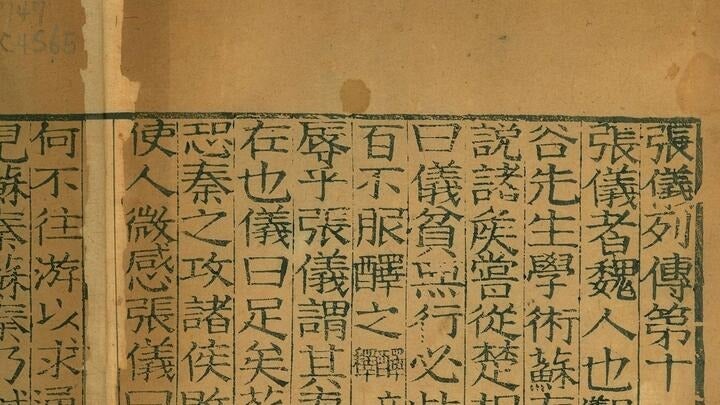 Biography of Zhang Yi 張儀列傳 is the earliest dated Chinese rare book at USC libraries. It is a chapter from the rare 1515 edition of Records of the Grand Historian 史記 of the Ming Dynasty (明正德十年白鹿洞書院刊本). This book is bound in butterfly binding 蝴蝶裝, which is the earliest known form of binding for printed books in China, developed during the Northern Song Dynasty (960-1127). In butterfly binding, printed sheets are folded inwards and pasted together at the fold, so that pairs of printed and blank pages alternate throughout the book.

The Records of the Grand Historian, also known in English by the Chinese name in pinyin Shiji 史記, written from 109 BC to 91 BC, was the Magnum opus of Sima Qian 司馬遷 (145?-86? BCE), in which he recounted Chinese history from the time of the Yellow Emperor until his own time. As the first systematic Chinese historical text, the Records profoundly influenced Chinese historiography and prose.