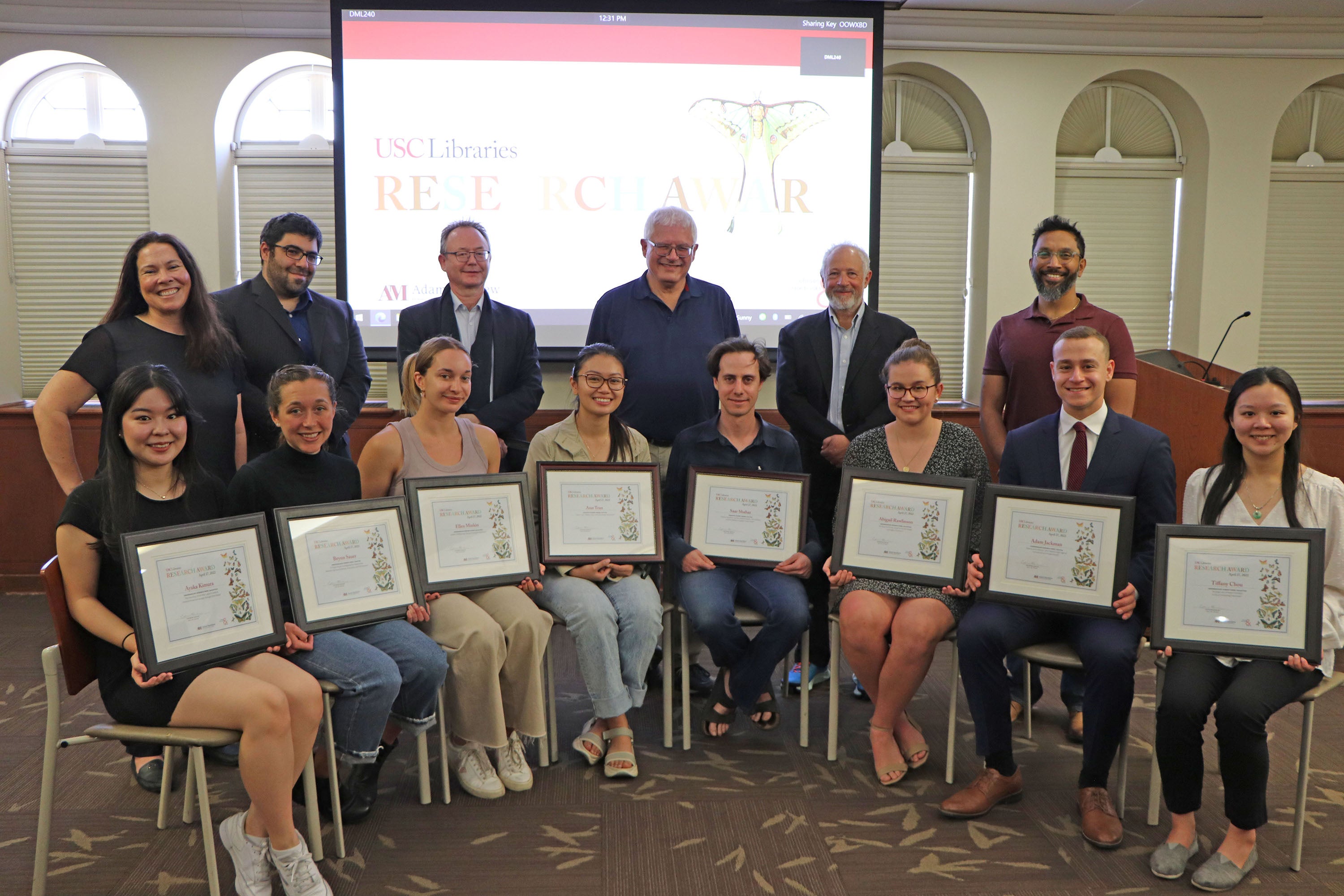 Research Award winners and their professors

The USC Libraries announced the winners of the annual Research Award competition, honoring exceptional student research completed at USC in a for-credit class or through independent study during the previous calendar year. Undergraduates may use either the reference and research resources of the USC Libraries or primary source materials held by the university’s Special Collections, while graduate students must make use of the latter in their essays. Eight prizes were awarded—two in the graduate category and six for undergraduates.

In the graduate category two papers tied for first prize: Saar Shahar for “Artistic Incentives and the Quest for Status: John Webber and the making of Captain Cook’s Death,” along with Ann Tran for “USC in 1970: Politics, Race, and the Antiwar Movement.” Shahar studied painting as an undergraduate at CalArts before returning to school to pursue a PhD in English. His paper, written under the direction of Professor Peter Mancall, examines how the artist John Webber, who traveled with Captain Cook and visually documented their voyages, played a key role in mythologizing Cook’s death at the hands of native Hawaiians. In his artist statement he thanked the Libraries for providing access during the pandemic to a trove of digitized images, letters, and journal entries. Tran relied heavily on the USC Digital Library, which holds digitized copies of the Daily Trojan and Trojan Family magazine, to investigate antiwar events on campus. In the reflective statement accompanying her paper for Professor George Sanchez, Tran complimented University Archivist Claude Zachary for his initial assistance—coming to her class, answering a number of “burning questions,” and facilitating access to archival items held by the library’s Special Collections.

First prize in the undergraduate category went to Adam Jackman for his paper “Avarice and Ambition: John Adams’s Fight Against Commercial and Private Interest,” written for Professor Nathan Perl-Rosenthal’s History 413 research seminar The Age of Revolutions. A combination of USC Libraries video tutorials, databases, and staff assistance sustained his inquiry into the intellectual life of our nation’s second president. In particular, access we provide to a database of all of Adams’s written correspondence was the “single most useful tool” in putting together his paper.

Tiffany Chou’s honor’s thesis in the Marshall School of Business: “Strategic Use of Patent Portfolios in Cloud Computing Enterprises”

Ellen Minkin, majoring in global health, for “Jewish Childbearing in Ghettos During the Holocaust,” written for Professor Wolf Gruner’s Jewish Studies course on the Holocaust

Third prize went to Brynn Sauer honor’s thesis in the Marshall School of Business: “A Triple Threat: Investigating the Relationship Between Payment Schemes, Personality, and Performance.”