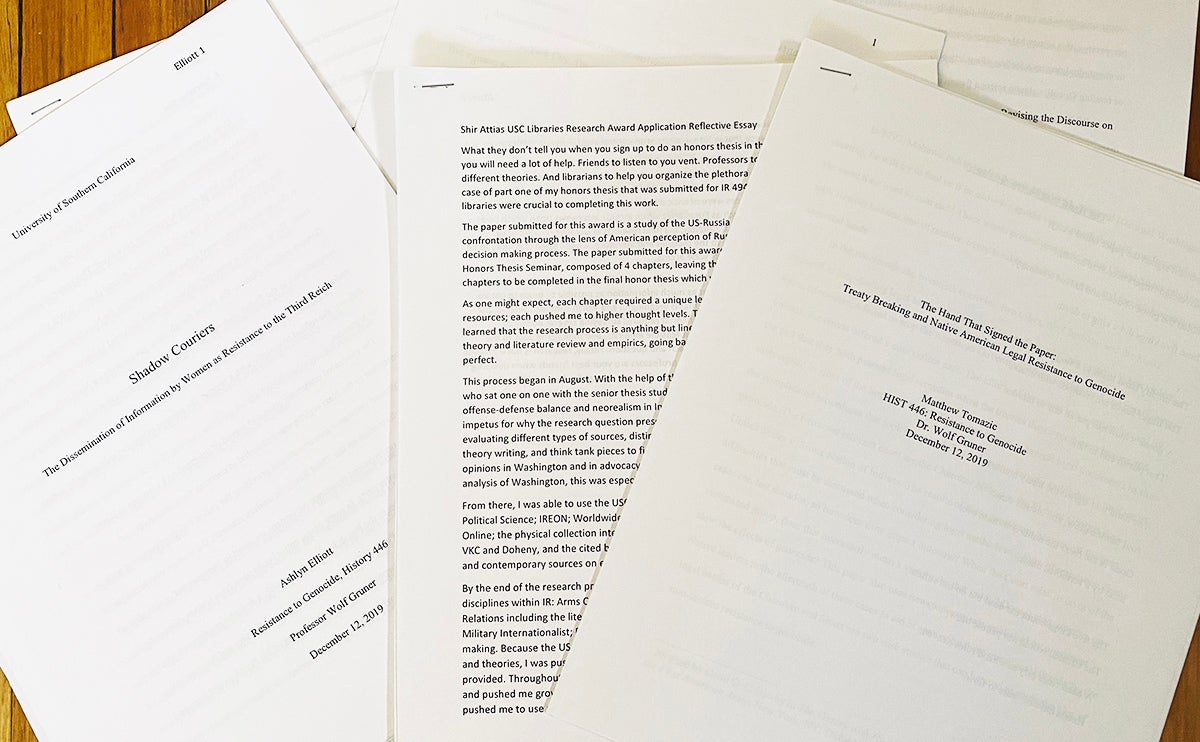 The USC Libraries have announced the winners of the annual Research Award competition, honoring exceptional student research completed at USC in a for-credit class or through independent study during the previous calendar year. Undergraduates may use either the reference and research resources of the USC Libraries or primary source materials held by the university’s Special Collections, while graduate students must make use of the latter in their essays.

First prize in the graduate category went to Michael Anthony Turcios, a PhD student in cinematic arts, for his paper “Decolonial Expressions in Barrio Film of 1970s East Los Angeles.” Turcios is a repeat winner, having won in 2018. USC School of Cinematic Arts Professor Priya Jaikumar, for whom Turcios wrote the paper, described the work he undertook, “He has been gathering the creative output of marginalized urban Latinx communities from East Los Angeles and migrant Arab communities from Paris during the 1960s and 1970s, to unearth the artistic expressions of urban resistance during a crucial period of upheaval in both cities. Over the past two years, his quest to draw attention to material ranging from ephemeral urban murals, posters, flyers, and non-theatrically-screened short community films has made him seek out training in some of the best archiving programs nationally. For his award-winning essay, Michael utilized the excellent resources here at the USC Libraries to extend his insightful analysis.”

Second prize in the category went to Ryan Nhu for his paper “‘Coming Out’ on the Global Stage: Queer Theory and International Human Rights Law.” Nhu wrote the paper for political science and international relations professor Alison Dundes Renteln of USC Dornsife. In a reflective essay accompanying his submission Nhu warmly thanked librarian Robert Labaree in VKC library for his assistance locating texts and resources that were key to bolstering his argument as well as his “stalwart support of my academic pursuits, particularly his investment in my project of analyzing global atrocities committed against, and international legal remedies established for, queer peoples around the world.”

First prize in the undergraduate category went to Matthew Tomazic, a senior majoring in history. Tomazic’s paper, “The Hand That Signed the Paper: Treaty Breaking and Native American Legal Resistance to Genocide,” was written for Professor Wolf Gruner’s History 446 course Resistance to Genocide. In the reflective essay for his submission, Tomazic thanked the entire USC history department “for running an incredible program and making my time here enlightening and enjoyable. Even after all the late-night writing sessions, my passion for history has only grown.”

The second prize for undergraduates went to Shir Attias for her international relations honors thesis on “The US-Russia BMD Confrontation: American Perception of Russian Opposition to US BMD and its Implications for Future Arms Control Negotiations.” Attias described how the project honed her research capabilities, “The process of honing a research puzzle is not linear. It requires surveying several bodies of literature, comparing theories, thinking about feasible empirics, and then going back to the literature until finding the near-perfect approach and question. Librarians and professors are your best friends when pursuing such an onerous process and it’s important to know that you can ask for help in sifting through what sometimes feels like an endless reading list.”

Third prize went to another of Professor Gruner’s students, Ashlyn Elliot, for her paper “Shadow Couriers: The Dissemination of Information by Women as Resistance to the Third Reich.” Judges were impressed with Elliot’s ability to “uncover lost history and shine a light on the forgotten” and for “honoring women who risked their lives to save others against all odds. Their story deserves to be told and they deserve to be remembered.”

To learn more about the USC Libraries Research Awards, or to find out how to submit a paper for the 2020 competition, visit libguides.usc.edu/researchaward.