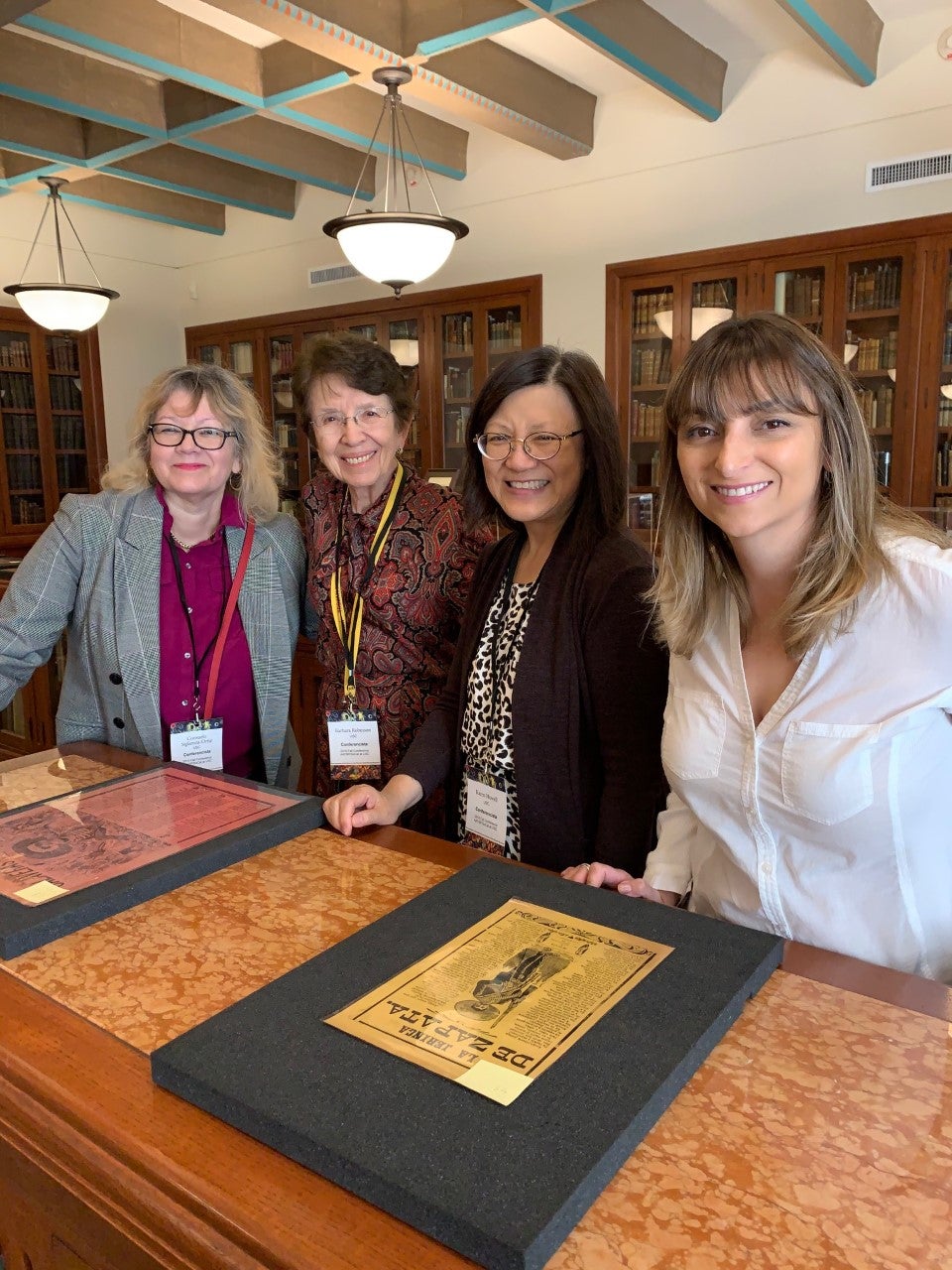 A panel at last weekend's fall meeting of the Southern California chapter of the American Association of Teachers of Spanish and Portuguese (AATSP) featured the USC Posada Project, an innovative collaboration between the USC Libraries and the USC Dornsife College's Department of Latin American and Iberian Cultures. The project invited students from two Spanish language courses into the USC Libraries' Special Collections, where they handled rare artifacts created by Mexican graphic artist and printmaker Jose Guadalupe Posada.

Librarians Karen Howell and Barbara Robinson organized the panel with USC Dornsife professors Consuelo Siguenza-Ortiz and Liana Stepanyan. Following the panel, attendees could browse a special exhibit of selected broadsides from the Jose Guadalupe Posada collection, which is part of the USC Libraries' Boeckmann Center for Iberian and Latin American Studies.

Below are the full title and description of the panel, courtesy of the organizers:

The USC Posada project, a merger of language and cultural instruction with instruction in basic elements of primary source literacy, leading to a digital exhibit, is a recent collaboration between two teaching faculty in the Dornsife College’s Department of Latin American and Iberian Cultures and two library faculty in the USC Libraries’ Special Collections and the Leavey Library. The project was integrated with the cultural portfolios for undergraduates in two Spanish language courses, introducing them to original Posada broadsides, the Calaveras and those about the Mexican Revolution, from the Jose Guadalupe Posada collection in the USC Libraries’ Special Collections. During two class visits to Special Collections, students learned about the significance of Jose Guadalupe Posada, the notable Mexican graphic artist and printmaker and his broadsides. Students were instructed in handling the rare primary materials and in analyzing, interpreting, and using the lively visual and textual broadsides as the basis for their interpretive essays in Spanish. Also they learned to identify and create key metadata elements for their broadsides (title, date and descriptive caption) for the digital exhibit using Scalar, a multimodal publishing system developed at USC. The process of determining the metadata elements gave the students’ deeper insight into the broadsides’ messages, context, and significance.  In summary: The Posada project which combines language instruction, within a cultural or historic context, and engagement with rare primary sources, allowed students to gain a unique perspective of the challenges of using primary vs. secondary sources for research; to acquire new skills in analyzing diverse information sources, including digital formats; to enhance their critical thinking abilities in their original essays in Spanish; and to share their insights with others through the digital exhibit.