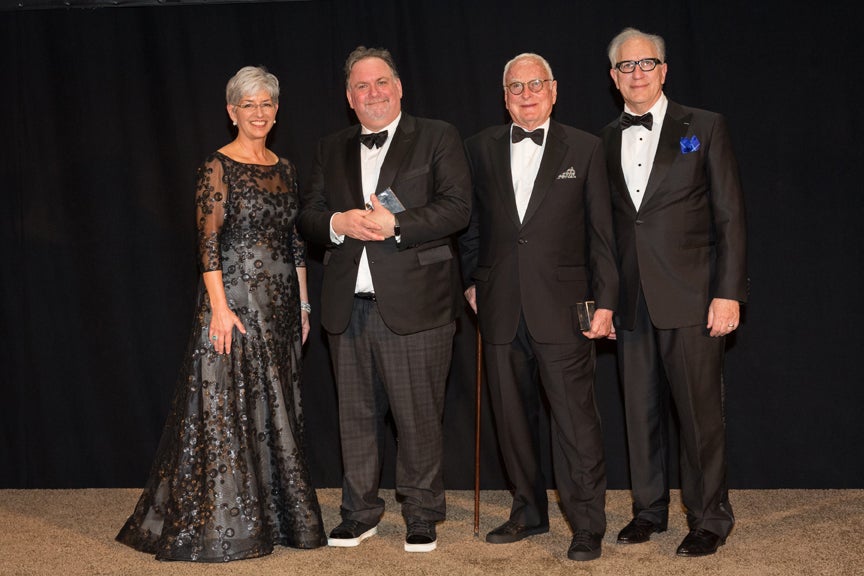 The authors and screenwriters behind the film “Call Me by Your Name,” and the television series “The Handmaid’s Tale” received the 30th-annual USC Libraries Scripter Award in the Feb. 10 ceremony at USC’s Doheny Memorial Library.

The Scripter Award recognizes the year’s best cinematic adaptation of the written word, and includes feature film and television adaptations.

In her welcoming remarks, USC Libraries Dean Catherine Quinlan paid tribute to the legacy of the Scripter Awards, “Scripter is celebrating its 30th birthday, and whether it’s your first Scripter or your thirtieth, I am grateful to everyone who has supported this fine, enduring Trojan tradition.”

USC Provost Michael Quick hailed the importance of libraries. “More than places where students have a space to learn and faculty have collections from which to launch their scholarship, libraries are the core for what we stand for in higher education,” he said.

In the television category, the selection committee chose “Offred,” the first episode of the “The Handmaid’s Tale,” written for the screen by creator and executive producer Bruce Miller. The series, streaming on Hulu, is based on the 1985 novel by Margaret Atwood.

Miller acknowledged Doheny Library, which hosted the ceremony. “The Handmaid’s Tale has been very wonderfully and generously feted over the last few months, but there’s something about getting an award in a library that is particularly wonderful.”

The other finalists were the writers behind episodes of “Alias Grace” (distributed by Netflix), “Big Little Lies” (HBO), “Genius” (National Geographic), “The Immortal Life of Henrietta Lacks” (HBO), and “Mindhunter” (Netflix).

In the film category, the winners were writer André Aciman, author of “Call Me by Your Name,” and screenwriter-director James Ivory, who adapted Aciman’s work for the screen.

Ivory, a USC alumnus, noted that he had been to Doheny Library before. “I left this building exactly 60 years ago when I graduated from the USC film school and they had the ceremony out in front of the library, and I haven’t been back since -- not to this building. It’s amazing to come back,” Ivory said. “I’m glad to be back for an adaptation of a very good book. As you know, I’ve made my career and name through adaptations.”

Due to a three-way tie in the nominating round, seven films were eligible this year. The other finalist films were “The Disaster Artist” (distributed by A24), “Logan” (20th Century Fox), “The Lost City of Z” (Amazon Studios), “Molly’s Game” (STX Entertainment), “Mudbound” (Netflix), and “Wonder Woman” (Warner Bros.).

Earlier in the evening, Quinlan honored USC trustees and longtime USC Libraries supporters Ronald and Valerie Sugar as the 2018 Ex Libris Award winners. In receiving the award, Ronald Sugar said, “The libraries are an essential underpinning of the mission of this university. And as the university grows and evolves to meet a world of social and technological change, so must its libraries. Catherine, you and your team have provided more than a decade of innovative leadership to advance and expand the reach of this precious academic resource.”

Legendary writer-director-producer Francis Ford Coppola received the 2018 Literary Achievement Award. Coppola noted that his films based on earlier written works gave possessive credit to the original author. The 1972 classic “The Godfather,” for example, which Coppola directed and adapted for the screen, was marketed as “Mario Puzo’s ‘The Godfather’” -- not “Francis Ford Coppola’s ‘The Godfather.’” “Anyone who’s adapted screenplays,” Coppola explained, “knows the author did the heavy lifting.”

Scripter began in 1988, co-founded by USC Libraries board members Glenn Sonnenberg and Marjorie Lord. For more information about Scripter—including additional images from the ceremony—visit scripter.usc.edu.