Punctuated by USC’s main commencement ceremony on Doheny Library’s doorstep, the USC Libraries joined with the rest of the Trojan family to celebrate the academic achievements of exceptional student scholars in series of events on May 9-11, 2018.

The festivities began on the afternoon of May 9 with the initiation of 204 students into the Honor Society of Phi Kappa Phi. The organization’s USC chapter, which makes its home at the USC Libraries, is the university’s oldest fully interdisciplinary honor society. Professor John Brooks Slaughter of the USC Rossier School of Education and the USC Viterbi School of Engineering delivered the keynote address and was among six initiates from the ranks of USC’s faculty and staff. 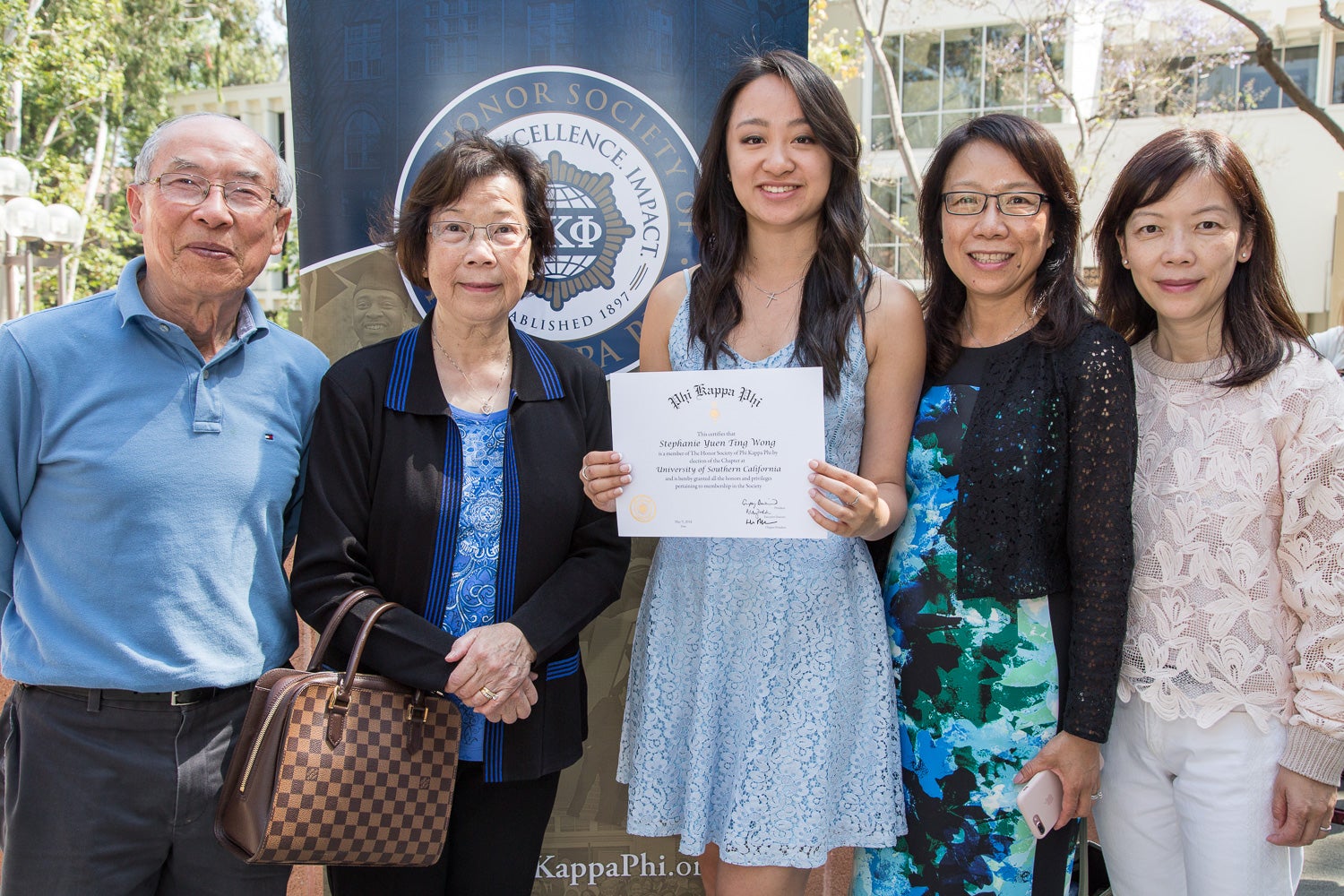 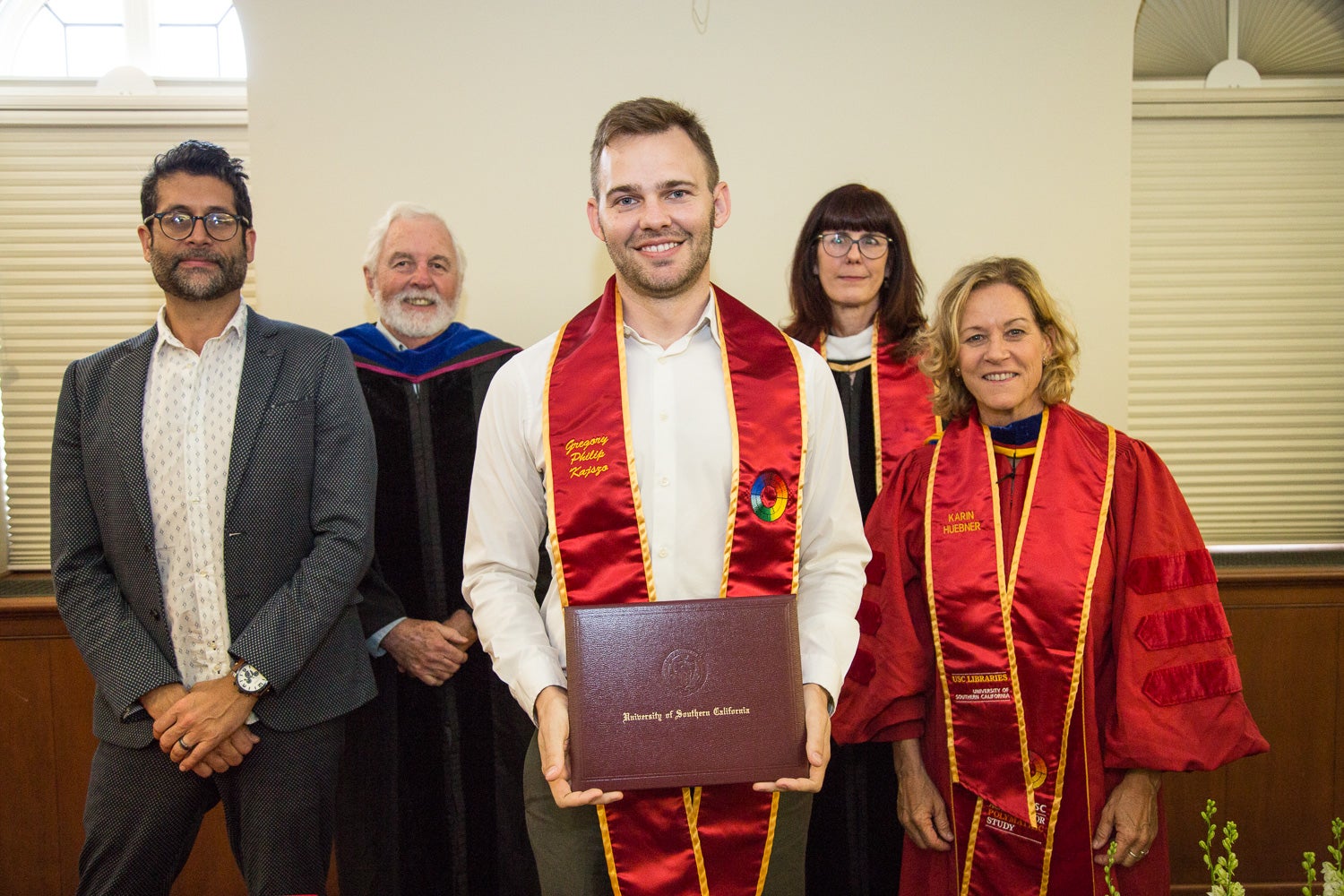 Above: photos from the Phi Kappa Phi and Academy for Polymathic Study ceremonies by Noé Montes

The following morning, on May 10, the libraries inducted 19 new fellows into the USC Sidney Harman Academy for Polymathic Study. Founded in 2010, the academy encourages integrated interdisciplinary investigation through encounters with eminent scholars, artists, and professional practitioners.

Inductee Peter Bergmann, who majored in economics/mathematics, took to the podium to discuss how his extra-curricular participation in the academy had invigorated his for-credit studies.

“As an analytical student who often painted issues in black and white,” Bergmann said, “the Academy has helped me see the tones of gray in both my coursework and discussions with other students. The interdisciplinary approach championed by the Harman Academy has pushed me to try courses outside my major and outside my comfort zone and challenged me to find the connections between seemingly unrelated topics.”

In her remarks, USC Libraries Dean Catherine Quinlan congratulated the inductees for “learning to grasp…the tapestry of knowledge,” a concept promoted by the academy’s founder, Sidney Harman.

“The idea of the tapestry is also a fitting metaphor for the work of a library,” Quinlan continued. “A great library is an embodiment of the tapestry of knowledge, of the intellectual and creative continuity of humanity. That’s why it was so important to Sidney—and to me, as a librarian and a dean of libraries—that the academy should make its home here in Doheny Library.” 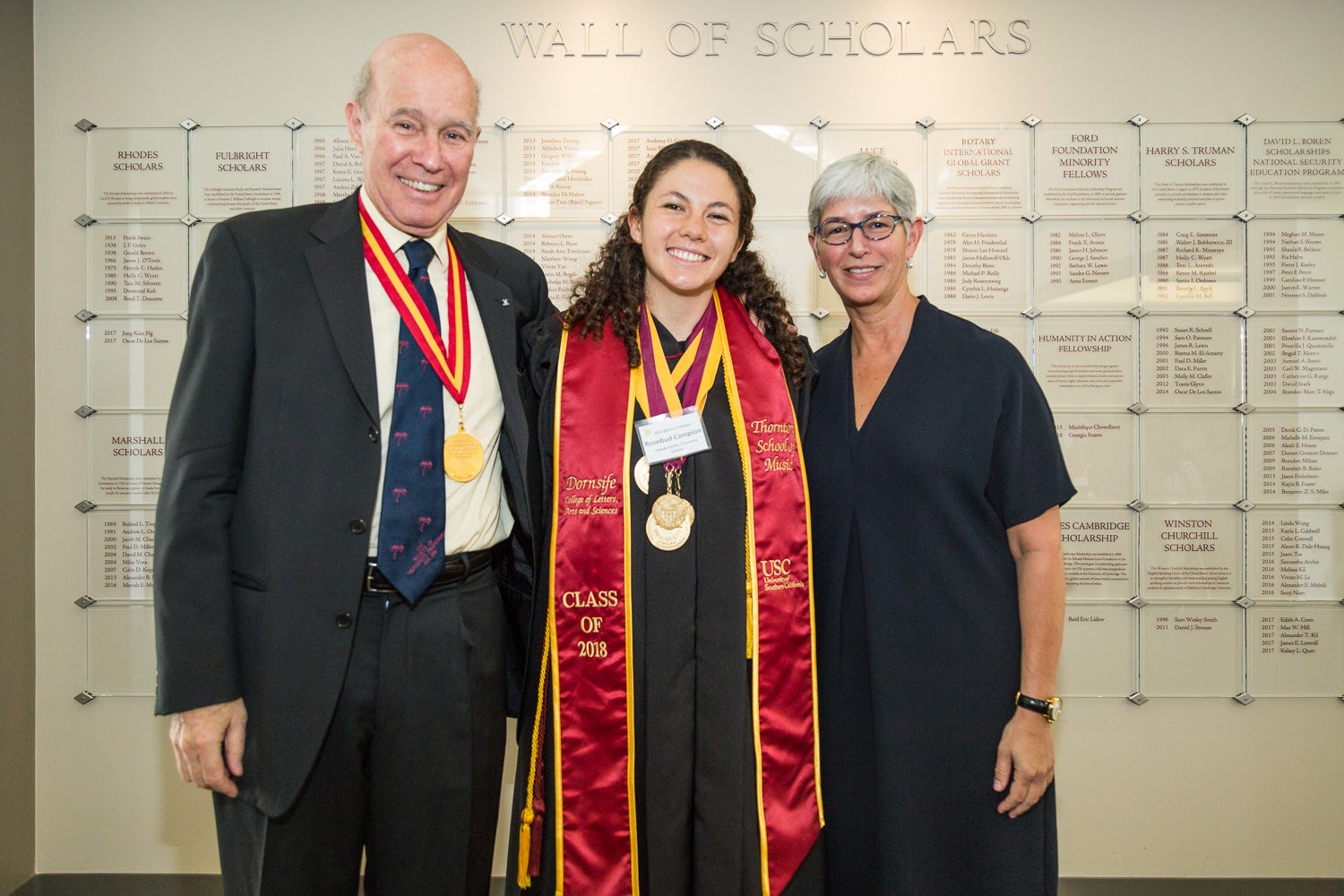 The celebrations moved across the McCarthy Quad that afternoon to Leavey Library for the annual Wall of Scholars reception. Surrounded by the names of past honorees in the library’s Weingart Reading Room, Dean Quinlan, University Professor Leo Braudy, and Skull and Dagger Society President Jerry Papazian ’77 joined hundreds of family members, friends, faculty, and staff in congratulating graduates who have won a national or international scholarship, or who have earned certain USC academic accolades.

Those included valedictorian Rose Campion and salutatorian Josephine Andrews—both of whom were also initiates of the Honor Society of Phi Kappa Phi (PKP). Their names, and the names of all this year’s honorees, will soon be etched into the wall’s glass panels, a unique tribute to scholastic excellence created by the Skull and Dagger Society in 1995.

Although Doheny Library serves notably as the backdrop for the USC’s main commencement event, the USC Libraries are constant companions through the entirety of students’ scholarly journeys—especially students in the USC Master of Management in Library and Information Science program, which the USC Libraries launched with the USC Marshall School of Business in 2013. On the afternoon of May 11, Doheny Library hosted a luncheon to honor the 22 most recent graduates of the unique online program. 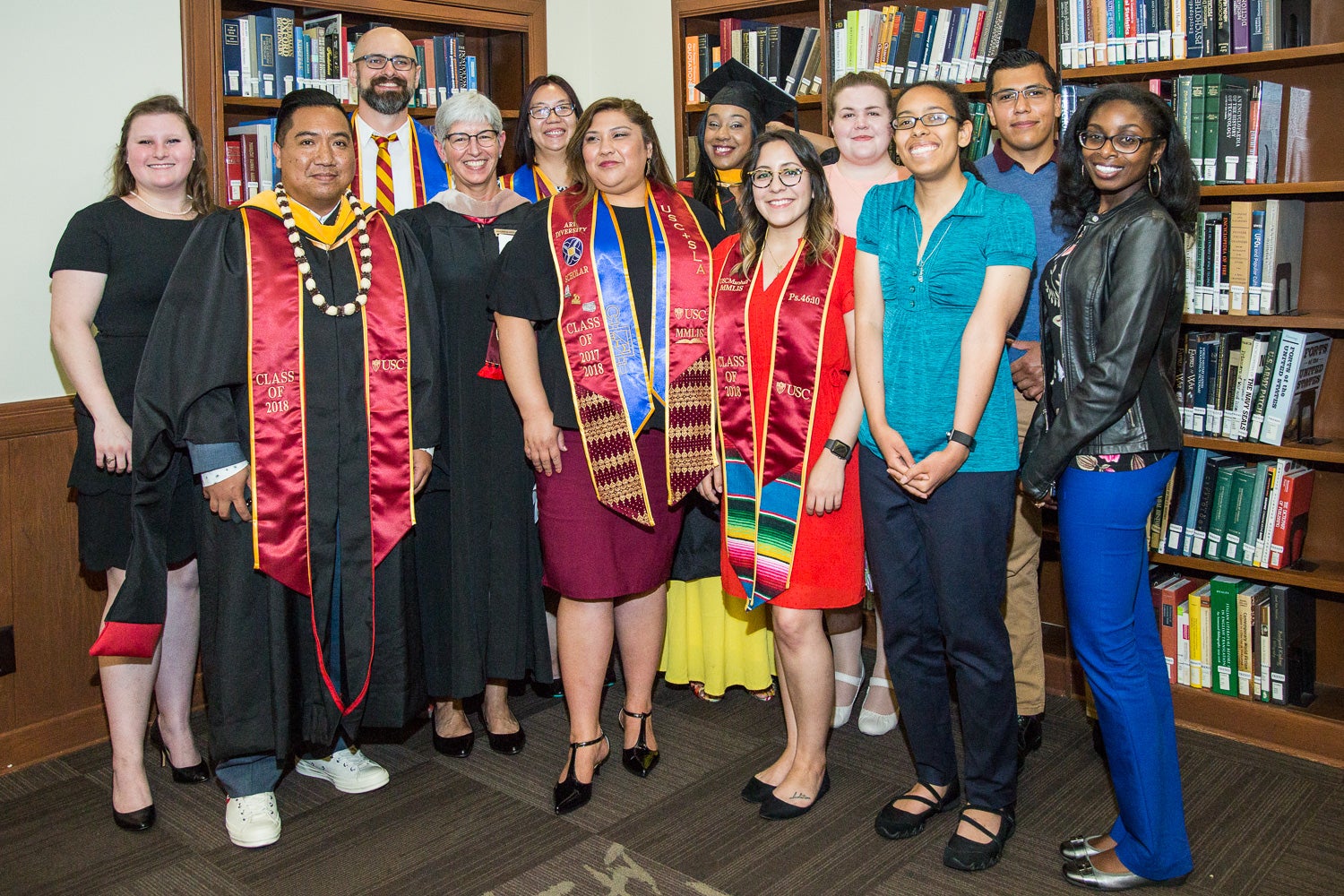 “You are about to start—in different ways, in different places—significant careers,” Gioa told the new librarians. “You will occupy an important place in public culture. You will not only be gatekeepers of information…but you will also be leaders of significant public institutions and the curators of irreplaceable historical and cultural legacies.”