Editor's note: Students working for the USC Libraries' Special Collections routinely come into close contact with unique archival materials. Here on the libraries' website, we're sharing occasional dispatches from these students about the collections they work with. Laurel Schmuck​, a PhD student in the USC's Department of Slavic Languages and Literatures, writes about the Gerhard and Marianne Pinkus Papers:

Gerhard and Marianne Pinkus emigrated from Germany to Los Angeles in the 1930s and were married in Santa Monica in 1943. After establishing themselves as local business owners (they owned a furniture store), Gerhard began to collect art. He made relationships with collectors and gallery owners in Los Angeles and, gradually, throughout North America and Europe. After accumulating a small collection of choice (and sometimes rare) finds, Gerhard and Marianne became a major force in the Los Angeles art world, especially in regard to their primary interest: Marc Chagall.

Through their collecting, the Pinkuses struck up a friendship with Chagall and his family, and they visited him at his home in Vence, France. The Pinkus Papers provide some glimpses into this friendship. Gerhard specialized in collecting Chagall’s early drawings, and occasionally he would acquire a rare work about whose creation he could find no contextual information. In these moments, he would write Chagall’s family to uncover little-known details about Chagall’s early creative history through the illumination of a single work’s background.

In one such instance, Gerhard discovered a drawing from Chagall’s illustrations of I. L. Peretz’s book The Magician in an American collection. A photograph of the drawing is shown here from USC’s collection: 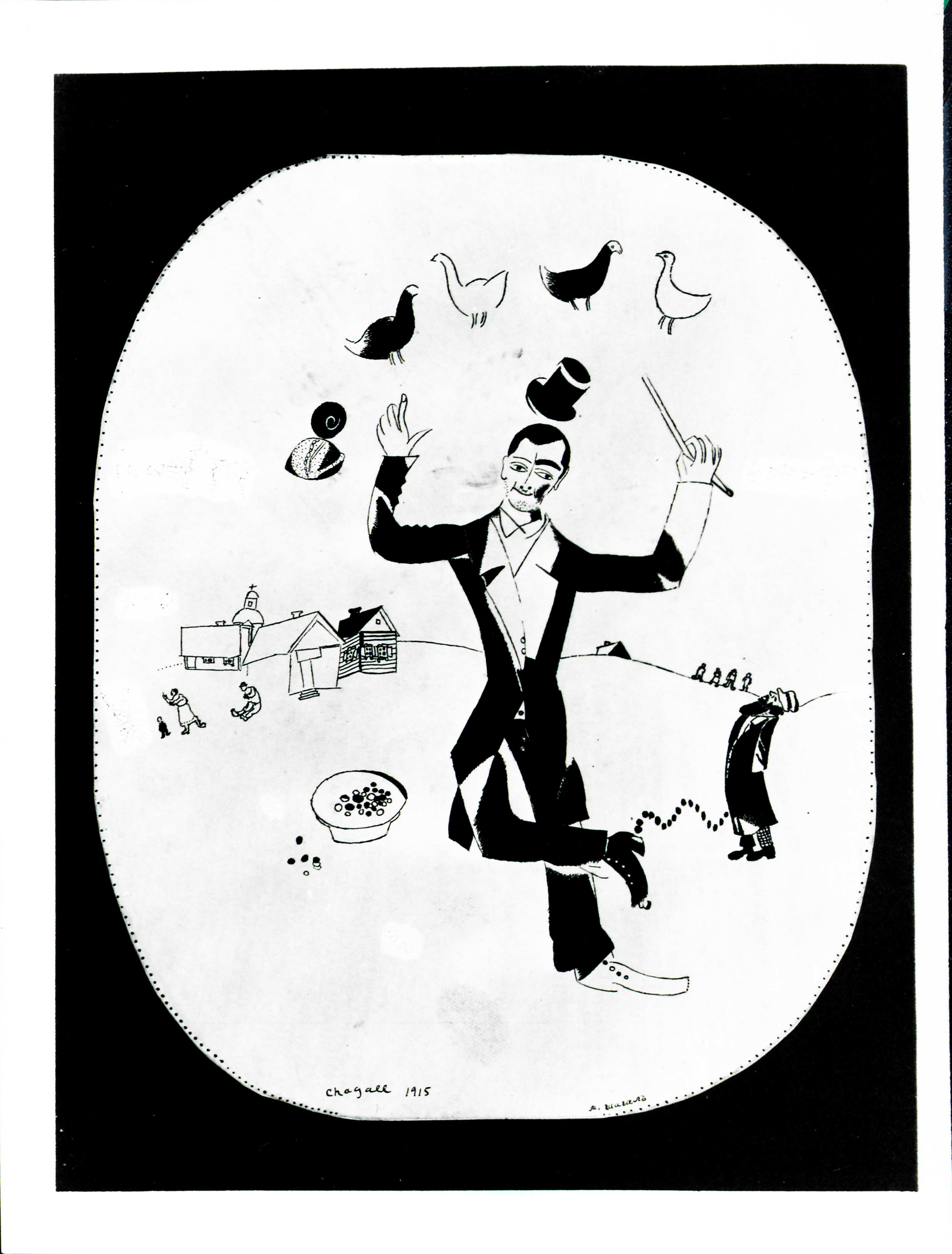 Gerhard’s papers surrounding this discovery include correspondence first with Franz Meyer, director of the Kunstmuseum Basel and son-in-law to Chagall (husband of his daughter Ida), and then with Chagall’s wife Valentina (Vava). Gerhard asks if this is one of the original illustrations (which were supposedly left behind in Russia) or if it is an unpublished or later-published illustration. Meyer phoned Chagall to ask him about the drawing, and related his happy response that the drawing was in fact one of the three originals. A letter from Valentina Chagall (below) in response to Gerhard relates some more information about the drawing. 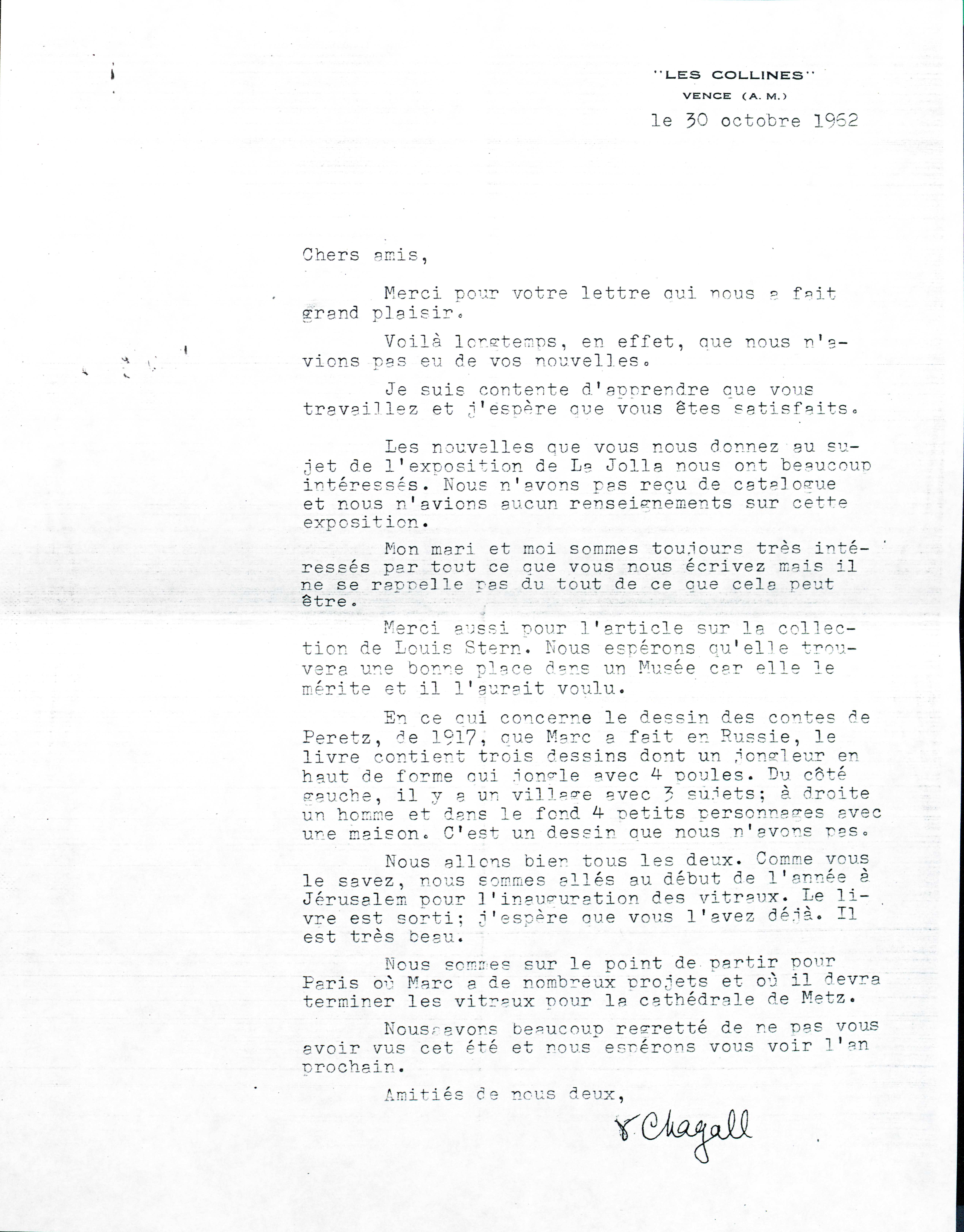 Along with this fascinating view of Gerhard’s constant investigations as a collector, we also come by details from Chagall’s personal and family life. Valentina’s letter mentions her and Chagall’s plans to travel to Jerusalem for the New Year to see the opening of Chagall’s world-famous stained glass windows at the Hebrew University Campus.

This was not the only time Gerhard stumbled upon a gem from Chagall’s past. Two years before, he happened upon a pencil and watercolor drawing, signed by Chagall, depicting a Russian woman washing clothes (below). Unable to read the simple inscription in Cyrillic at the bottom right corner, which translates “my sister,” Gerhard could not identify the subject or history of the rare drawing. 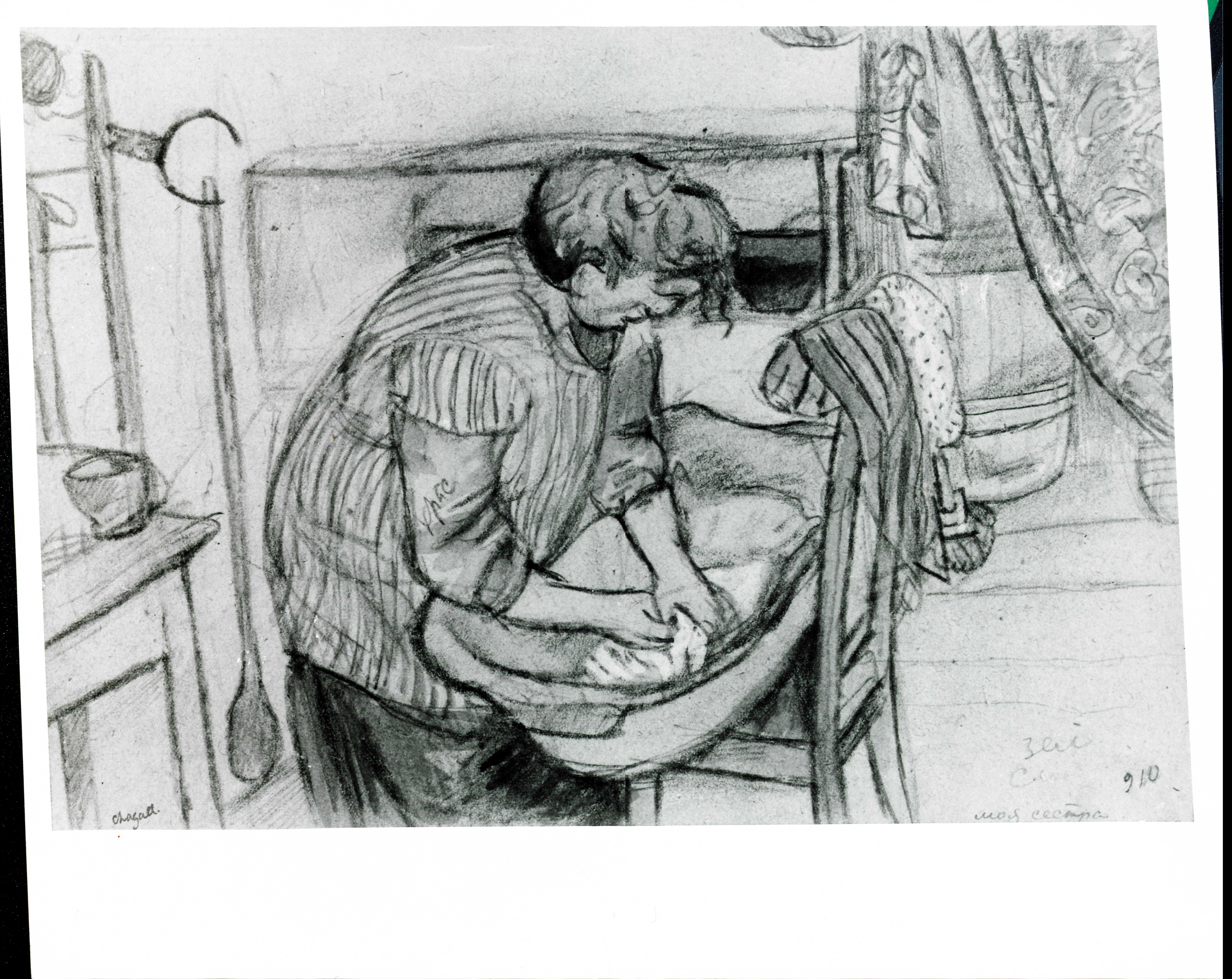 Fortunately, he made this discovery in Massachusetts while at an event at Brandeis University honoring Chagall himself. Gerhard showed the drawing to Chagall, who had not seen it in many years (it is dated 1910) and identified the subject as his sister. In the letter below from Gerhard to Chagall’s daughter Ida, we discover that Chagall was touched to be reunited with this image and requested that a photo be sent to his daughter. 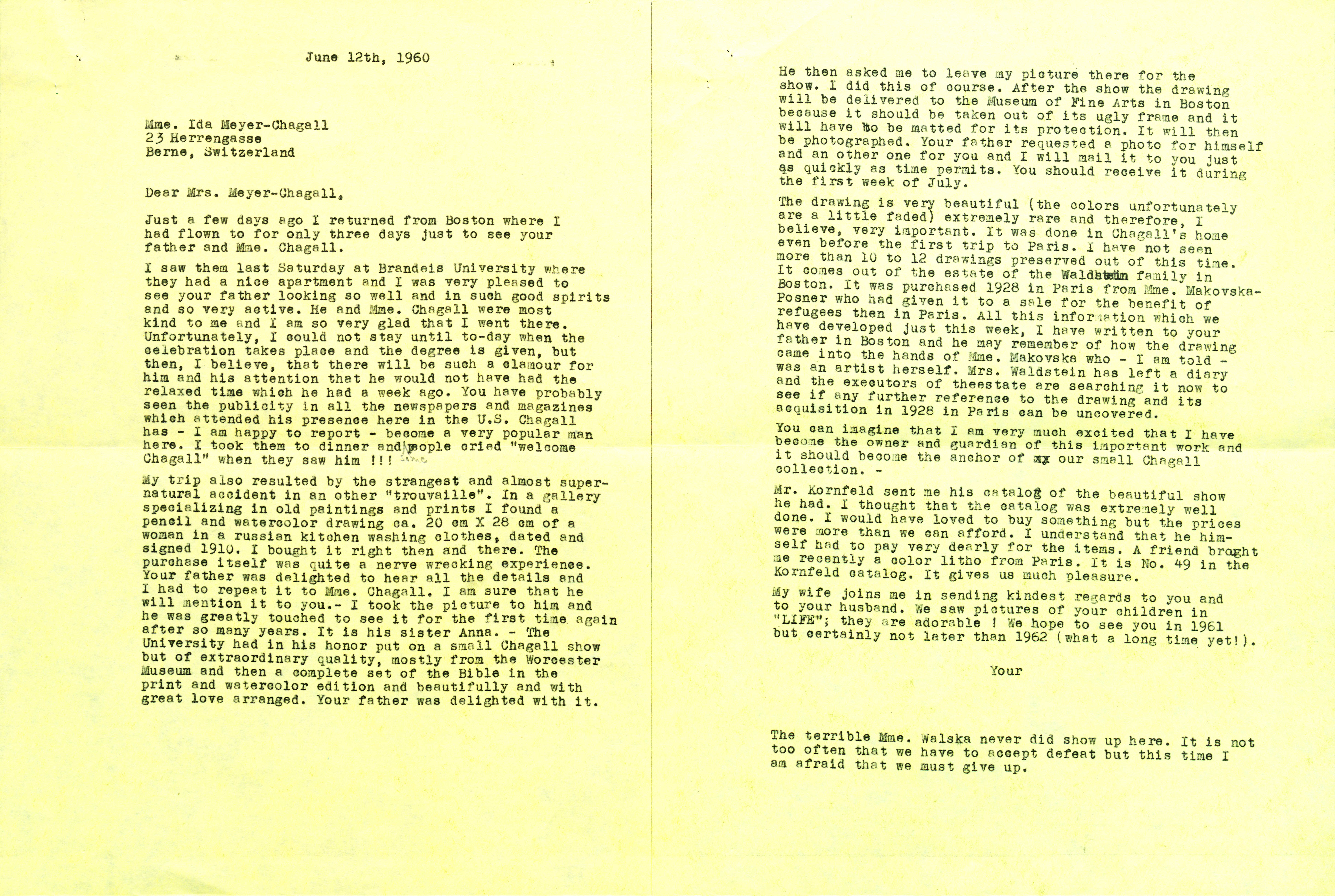 In her reply, Chagall’s daughter Ida congratulates Gerhard on his remarkable discovery: 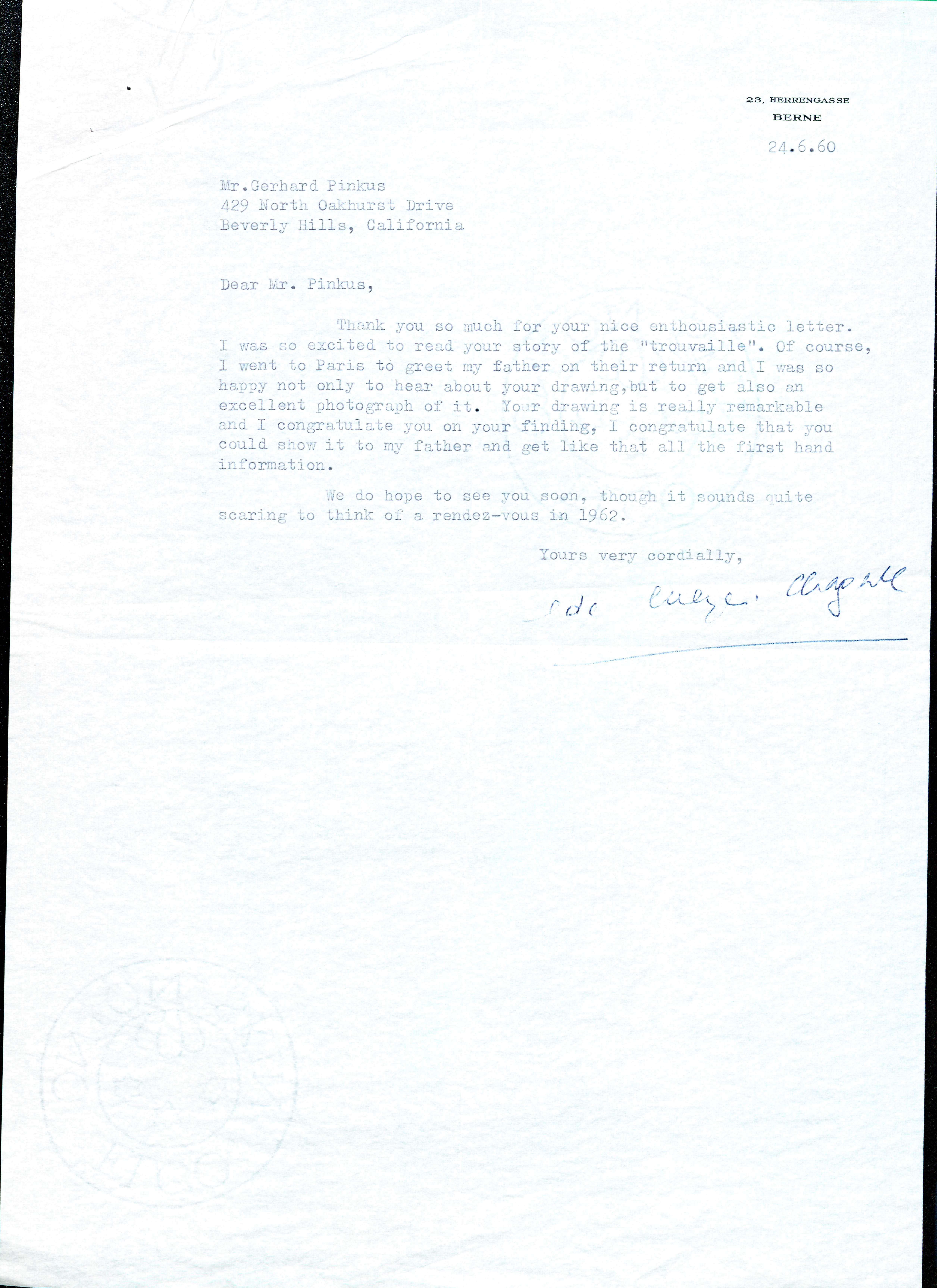 These two examples from the Pinkus Papers hint at just how many unexplored avenues remain for researchers of Chagall’s life and work through this newly acquired collection at the USC Libraries. Gerhard and Marianne Pinkus were largely responsible for bringing Chagall’s work to Los Angeles. In 1972, Gerhard collaborated with the Los Angeles County Museum of Art to exhibit Chagall’s early sketches. Gerhard worked doggedly to assemble a comprehensive exhibition of Chagall’s drawings (up to 1930) from his own collection and through loans from private collections all over the world. Below is an essay Gerhard wrote for the Los Angeles Graphic Arts Council newsletter to accompany the exhibit. 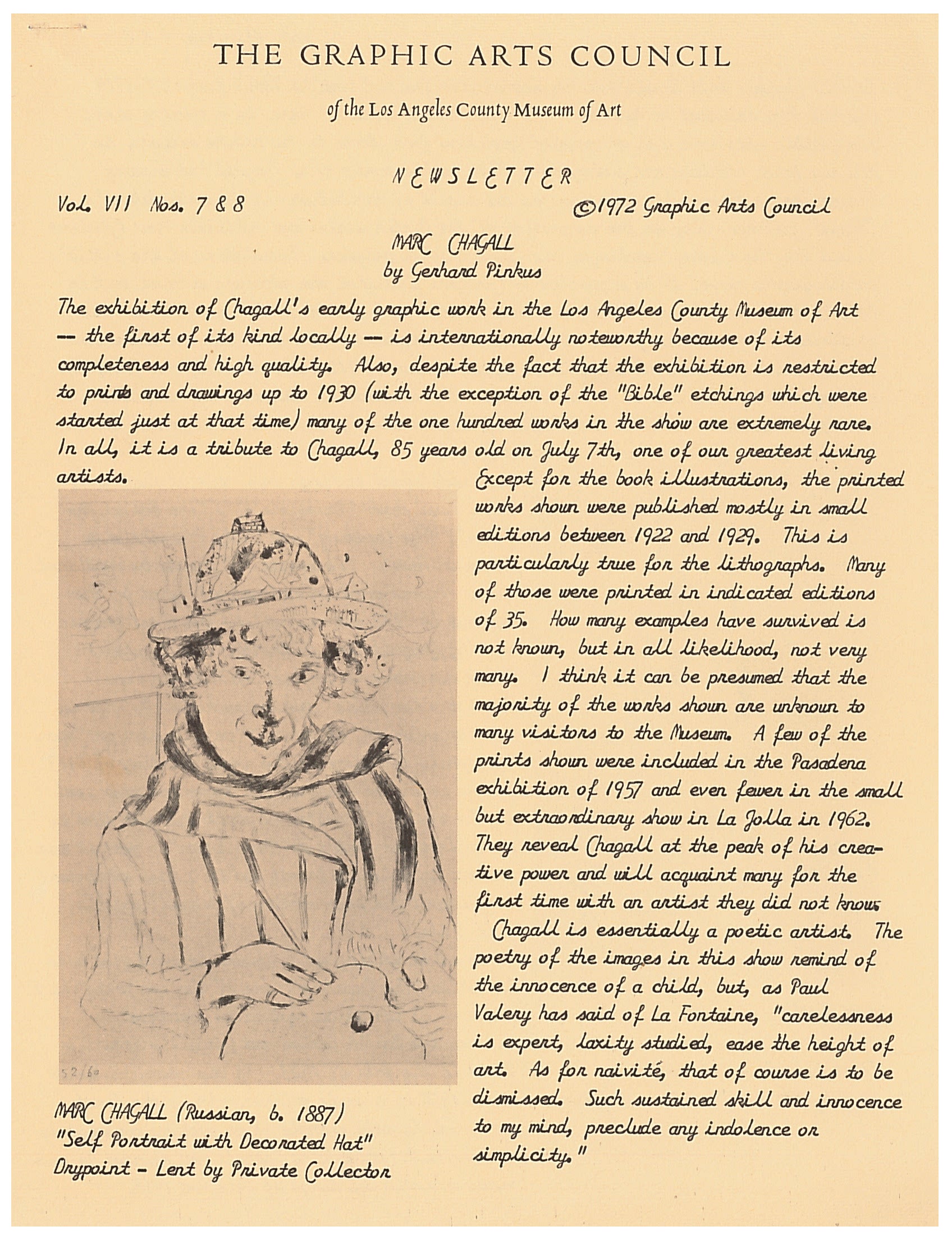 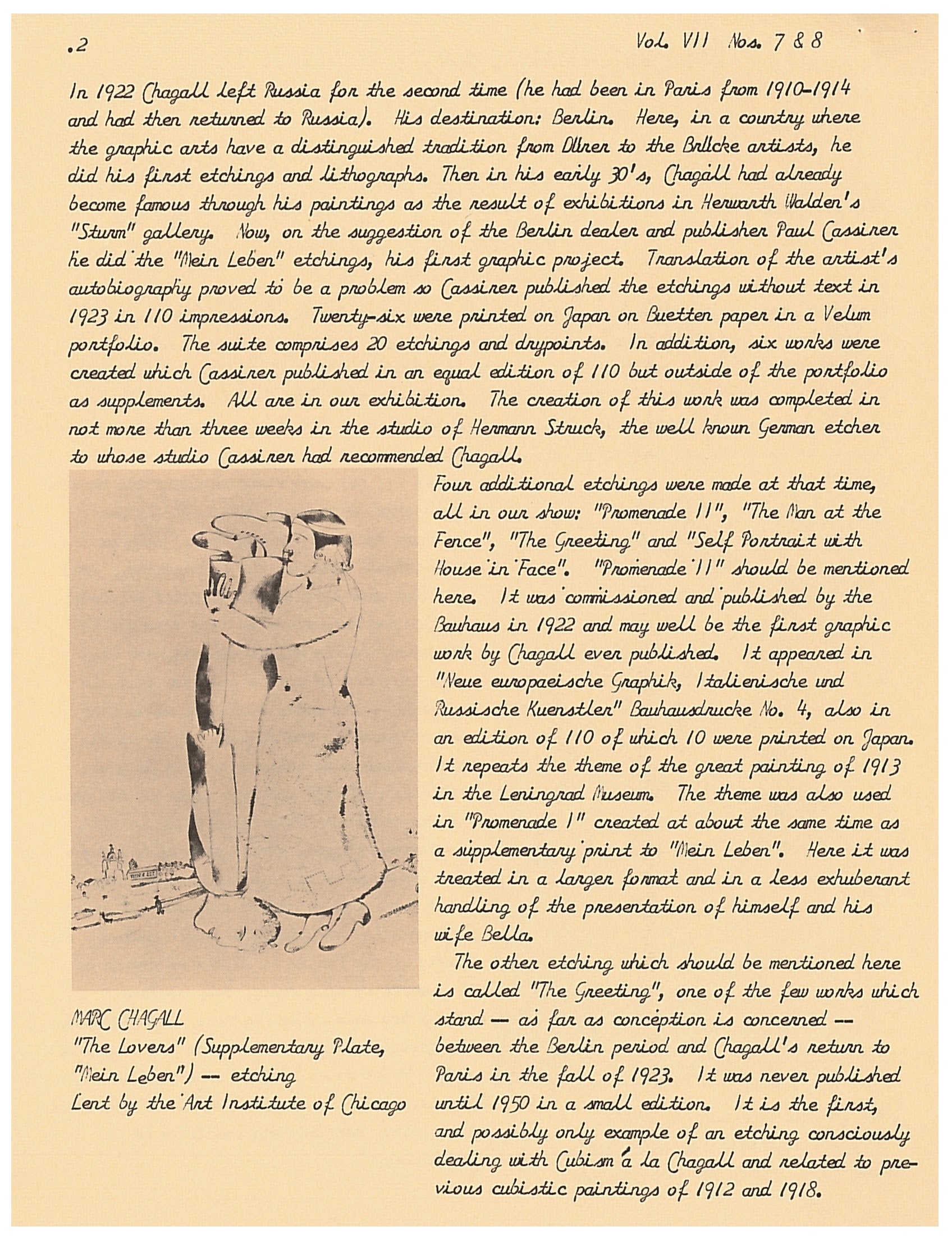 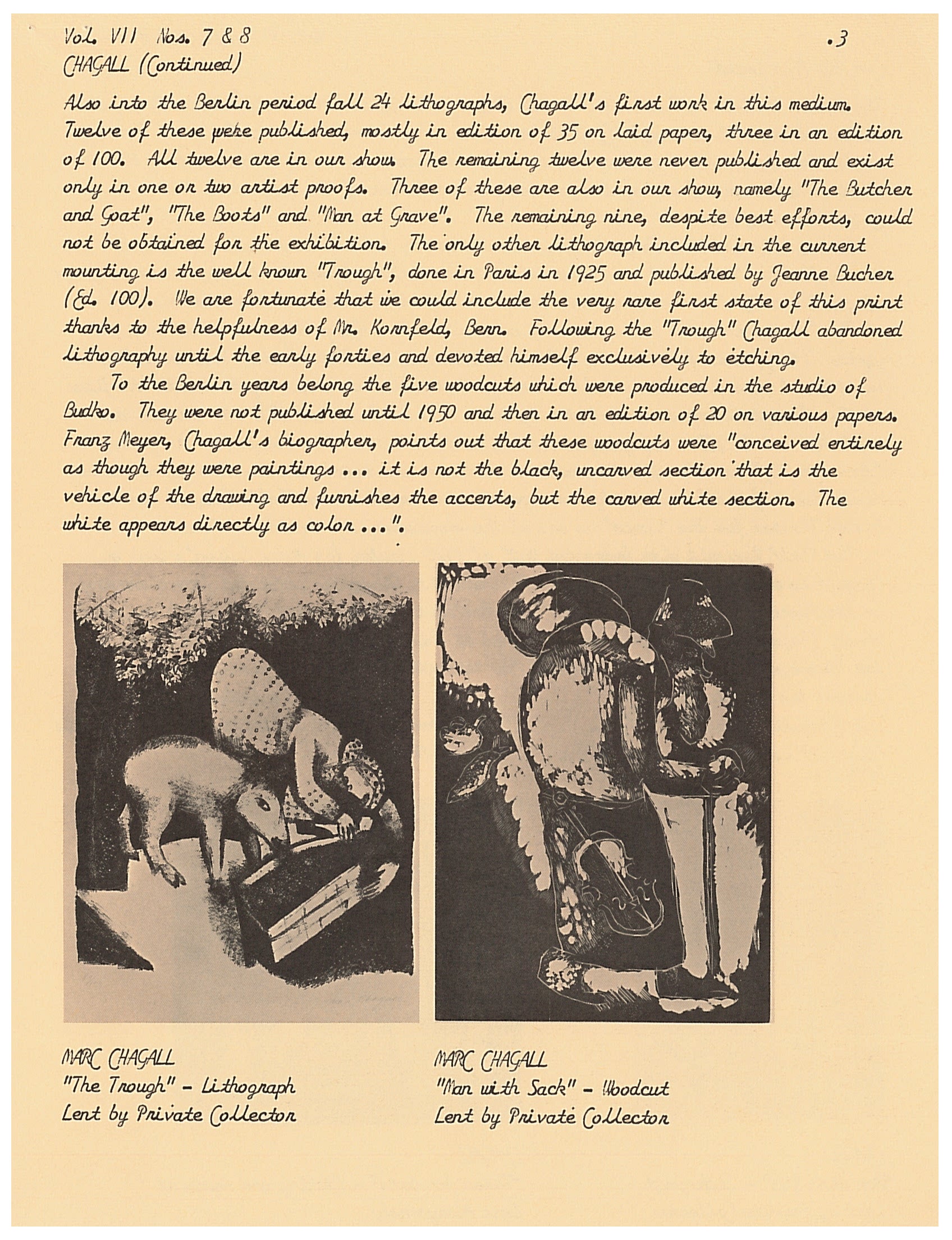 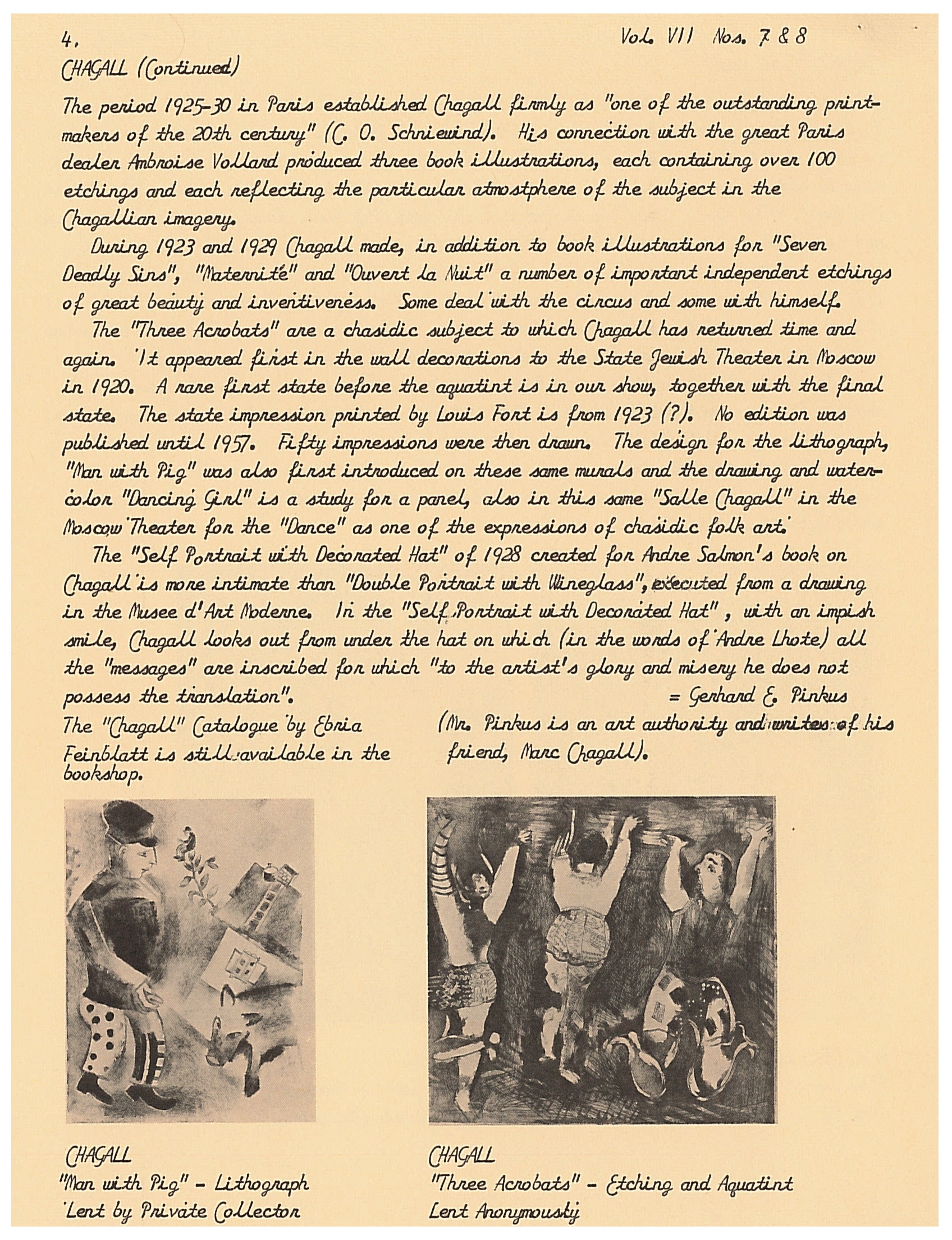 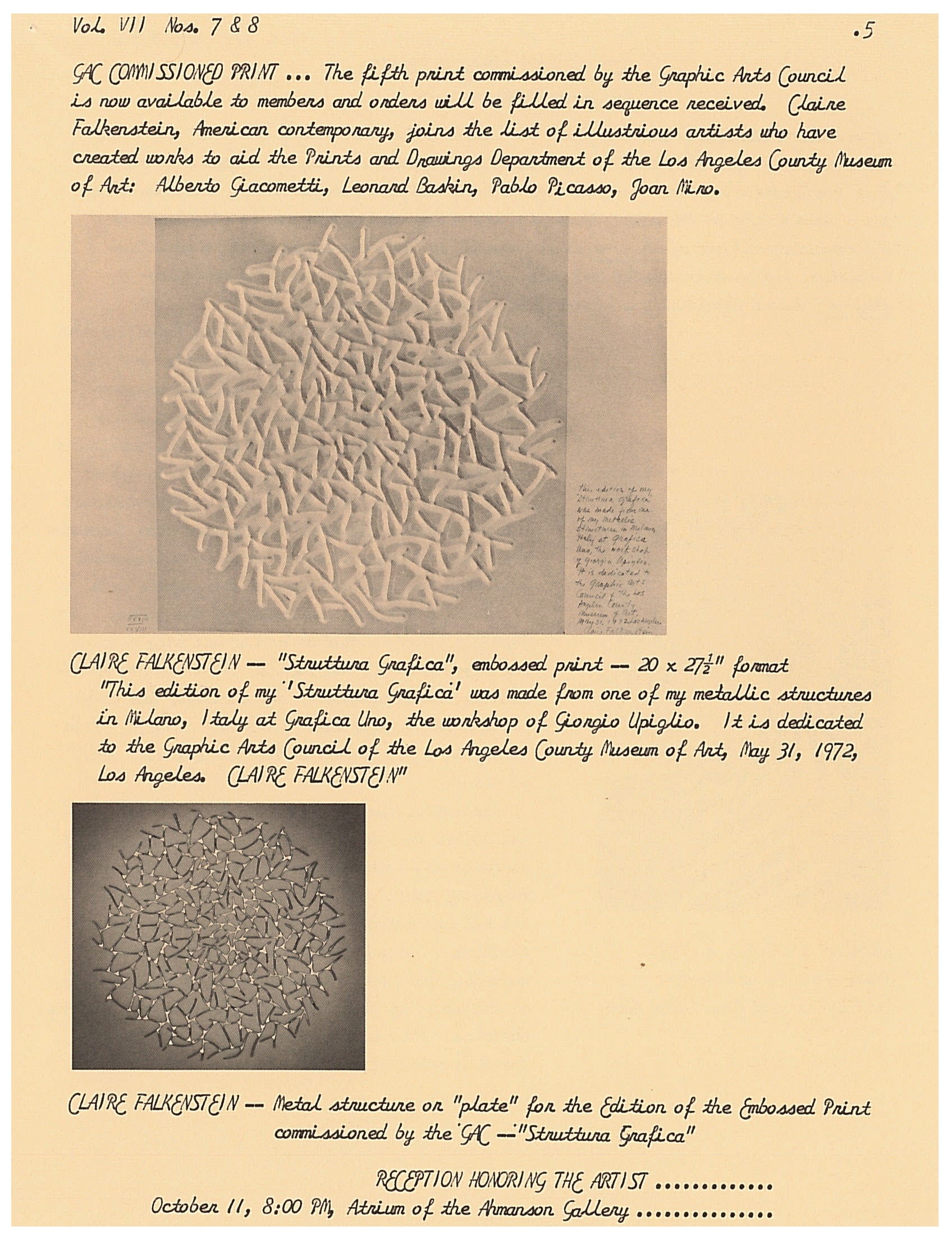 In 1996, LACMA put on another exhibit of Chagall’s works, including drawings from his renowned Bible series. At the opening of this event, Gerhard, along with Chagall’s granddaughter Bella Meyer, gave live commentary on the drawings based on their personal memories of Chagall and their knowledge of his art. The transcript of their words is included in USC’s Pinkus Papers along with other materials surrounding both LACMA exhibits.

Researchers of Symbolism, German Expressionism, or of the Los Angeles art world of the 1960s through the 1990s will find many untapped resources in this new collection. The legacy of Los Angeles art collectors Marianne and Gerhard Pinkus will spur new discoveries for years to come.