Project Underway to Digitize Mattachine Society and ONE Inc. Records

With generous support from the National Endowment for the Humanities, ONE National Gay & Lesbian Archives and the USC Digital Library are digitizing the records of two early LGBTQ civil rights groups with roots in Southern California, the Mattachine Society and ONE, Incorporated.

The Mattachine Society traces its roots to Los Angeles in the late 1940s, when famed activist Harry Hay first began to conceive of the organization. Beginning in 1951, men and women met secretly throughout L.A. to discuss gay and lesbian issues. At Hay's suggestion, this organization took the name Mattachine Foundation—after traveling performers in medieval Europe who staged satires wearing masks—because members were forced to hide behind masks. 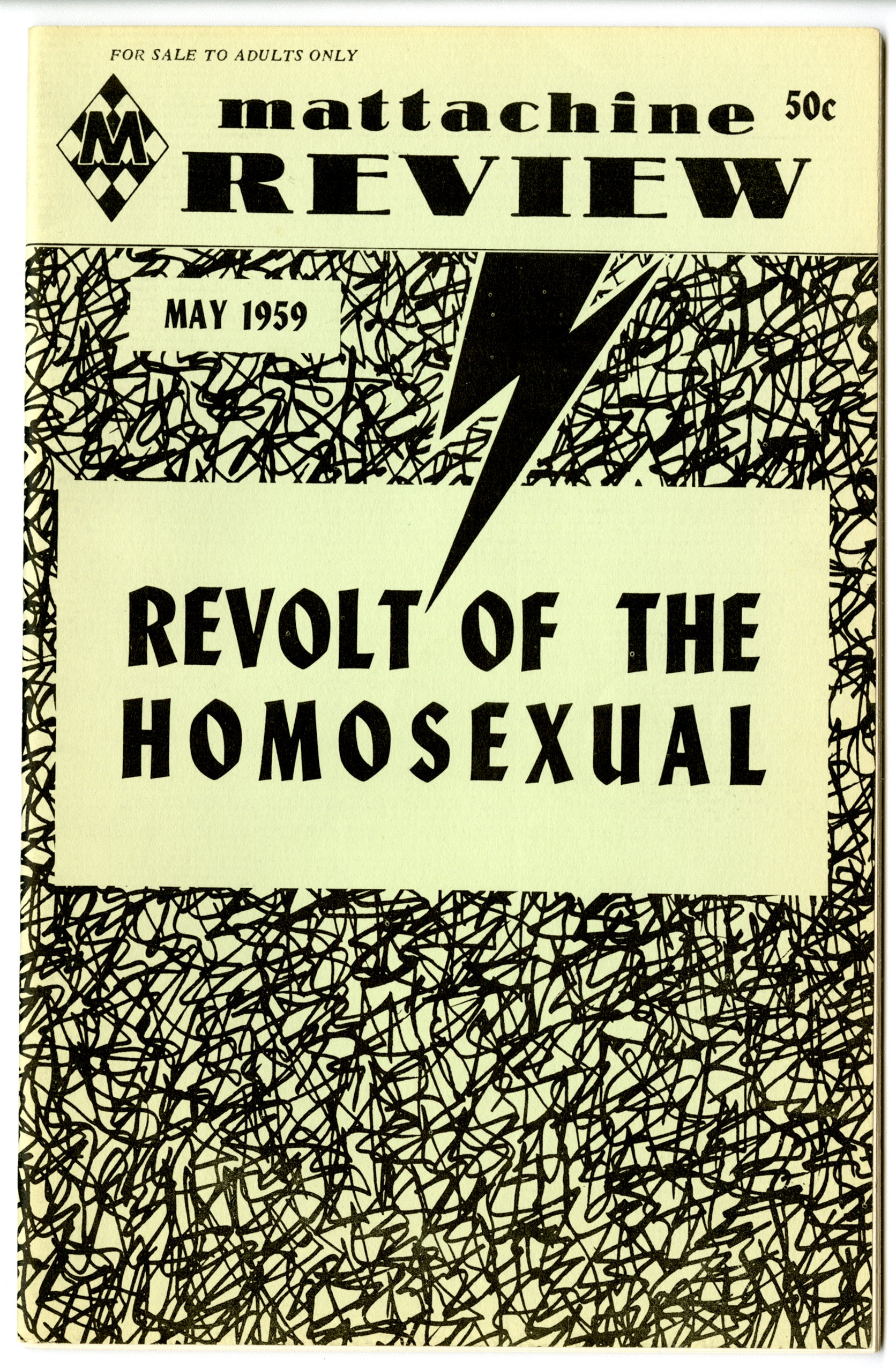 The Mattachine Society records held by ONE Archives preserve a detailed record of the first U.S. national gay organization from its founding in 1951 to its dissolution in 1961—as well as the activities of independent chapters in Los Angeles, New York, San Francisco, Washington, D.C., and other cities.

The records give a comprehensive picture of Mattachine activities and those of early activists like Harold Call, Harry Hay, and Frank Kameny; debates among Mattachine membership on issues like the secrecy and openness of the organization and how to position the Mattachine Society during the Red Scare and the Cold War-era attacks on supposed communists, leftists, labor activists, and activists of many descriptions in 1950s and 1960s America.

Founded in 1952 after discussions in L.A.-area Mattachine meetings, ONE Inc. launched its pioneering, eponymous national magazine in January of 1953. The organization’s name derived from the ecumenical sentiments in Thomas Carlyle’s writings on Goethe: “A mystic bond of brotherhood makes all men one.” As outlined in its articles of incorporation, ONE Inc.’s goal was “to publish and disseminate a magazine dealing primarily with homosexuality from a scientific, historical and critical point of view, and to aid in the social integration and rehabilitation of the sexual variant.”

Among the many highlights of the ONE Inc. records are 7,000 letters from ONE Magazine subscribers who came across the publication at a time when there was simply no other magazine like it. These are candid, personal letters that describe a diversity of LGBTQ experiences across the U.S., ranging from cities like Detroit, New York, and Washington, D.C., to small cities, towns, and rural areas. 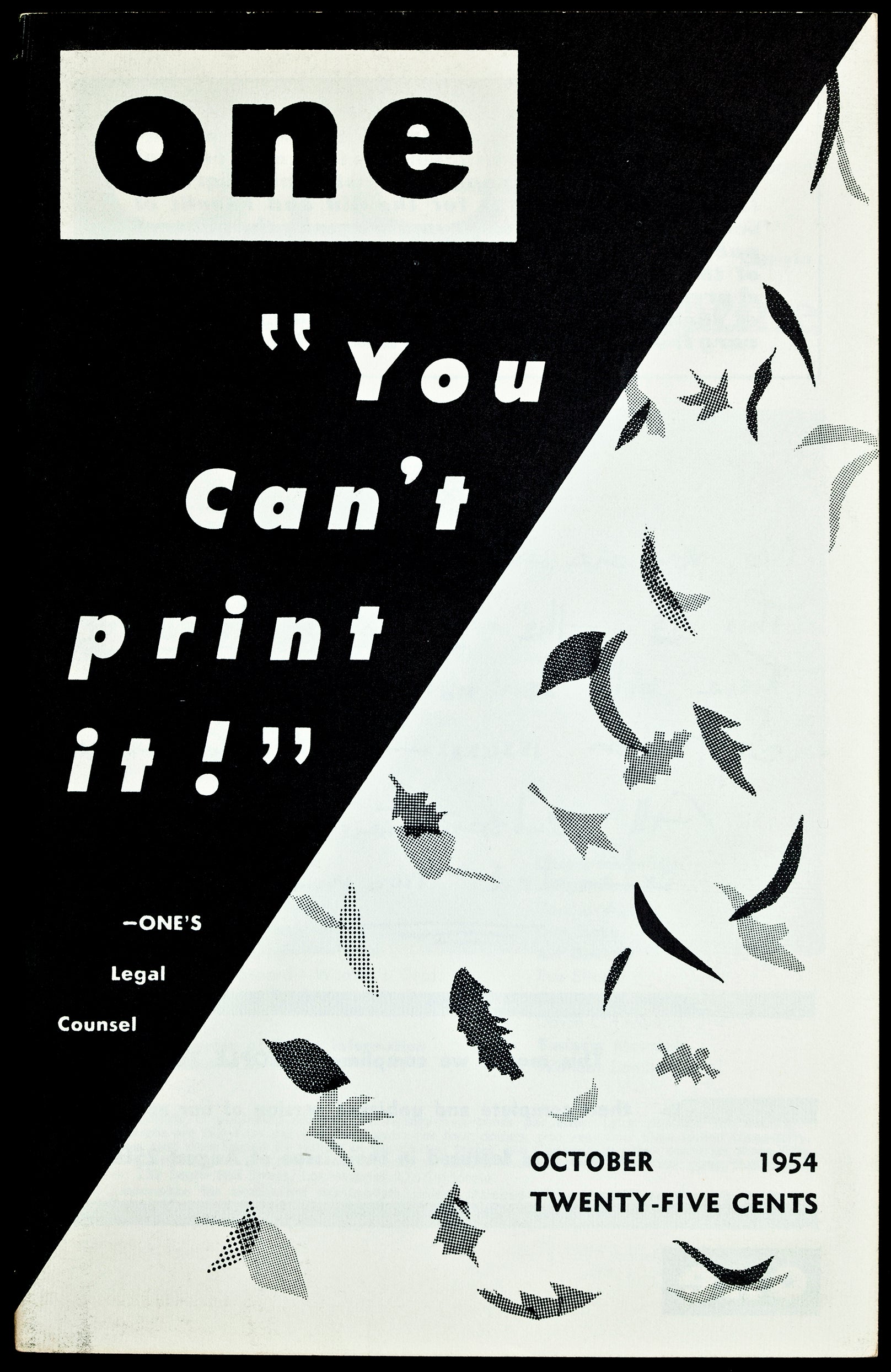 For example, letters describe the experiences of WWII- and Korean War-era gay and lesbian veterans; the inspiration early LGBTQ activists took from African-American civil rights efforts; the complex feelings about coming out to close friends and family during the 1950s and 1960s; and efforts to navigate Cold War-era U.S. society. 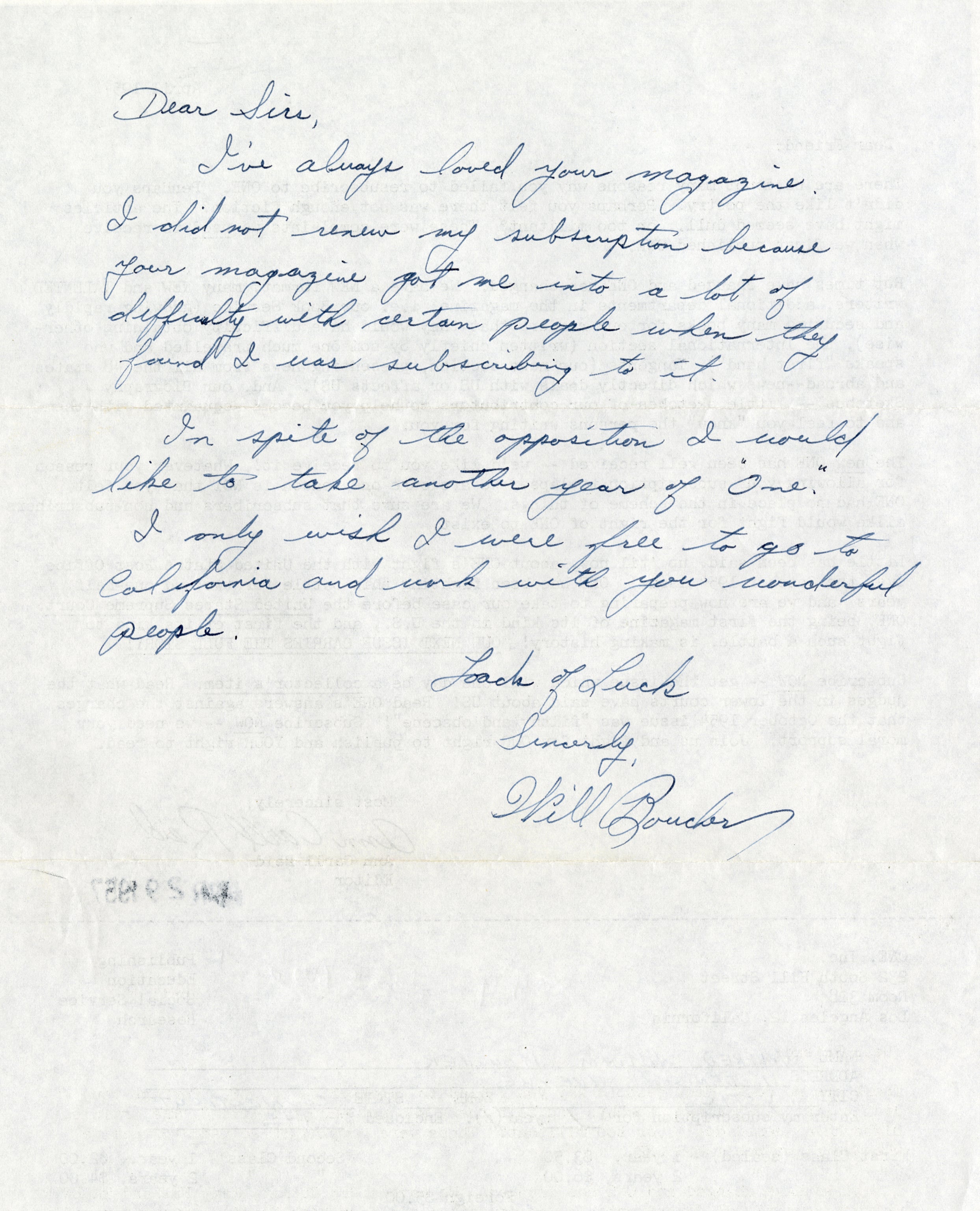 ONE Inc. records include correspondence and documents from the organization’s legal battles with the U.S. Postal Service, which declared ONE Magazine obscene and refused to deliver it. These battles culminated in the ONE Inc. vs. Olesen case and the U.S. Supreme Court ruling in ONE’s favor in 1958. Further, ONE Inc. records tell the story of how women—including activists Joan Corbin, Irma Wolf, Stella Rush, Helen Sandoz, and Betty Perdue—contributed to the organization’s success. ONE Inc. also worked closely with the Daughters of Bilitis, a lesbian homophile organization that began in San Francisco in 1955 and launched a magazine titled The Ladder in 1956.

Thus far, more than 15,000 pages of materials have been made freely accessible online via the USC Digital Library. These include the full runs of ONE Magazine and ONE Confidential, ONE Inc. meeting minutes, and other organizational records.