Precious, a popular Japanese women's magazine, recently profiled Rebecca Corbett, the USC Libraries' Japanese studies librarian. The article focused on Corbett's research on women in tea history and her current work on the Japanese Early Modern poet Tagami Kikusha. Corbett is the author of Cultivating Femininity: Women and Tea Culture in Edo and Meiji Japan, published earlier this year by the University of Hawai'i Press. 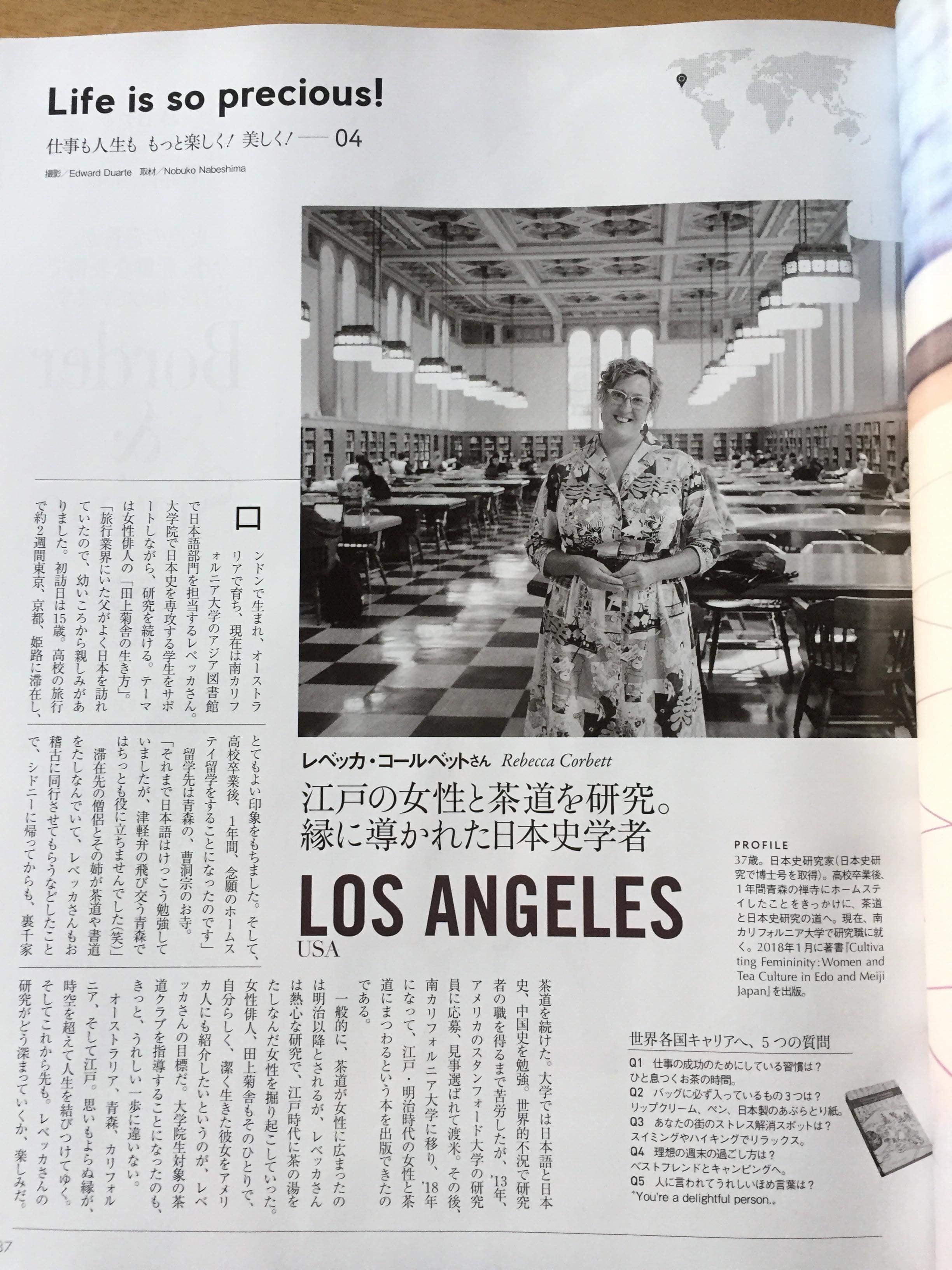 Below is a translation of the article, furnished by Corbett:

Born in London, raised in Australia, Rebecca now works at the University of Southern California in Japanese Studies. She supports graduate students studying Japanese history, and does research herself. Her current topic is the female poet Tagami Kikusha.

“My father worked in tourism and frequently travelled to Japan and it’s from that I became interested in Japan.” I first went to Japan when I was 15. That was a high school trip for 2 weeks to Tokyo, Kyoto, and other places which I really enjoyed. Then after I finished high school I spent one year as an exchange student doing homestay.” She was a student in Aomori, and did homestay at a Soto Zen temple. “The Japanese I had studied until then didn’t prepare me very well for the Tsugaru dialect spoken in Aomori.” She did tea and calligraphy as hobbies after school, and when she returned to Sydney found an Urasenke teacher to keep studying with. At university she studied Japanese language, and Japanese and Chinese history. Becoming an internationally recognized scholar, she moved to America in 2013 to do research at Stanford University. After that she started her job at the University of Southern California, then in 2018 published a book on women and tea culture from the Edo to Meiji periods.

In brief, it is normally said that women did not study tea before the Meiji period but Rebecca’s important research shows that women were involved in tea culture during the Edo period. Among them was the female poet Tagami Kikusha, and she wants to introduce her to American people so they can learn about this women who, like her, led a diverse life. She has also started a tea club with graduate students at her university, and so she is leading a happy life.

Australia, Aomori, California, and then Edo. She overcomes space and time to connect human lives. And there is her future research too. How exciting to think what Rebecca’s research will become next.