Lost L.A., a Co-Production of USC Libraries and KCET, Returns for a Third Season 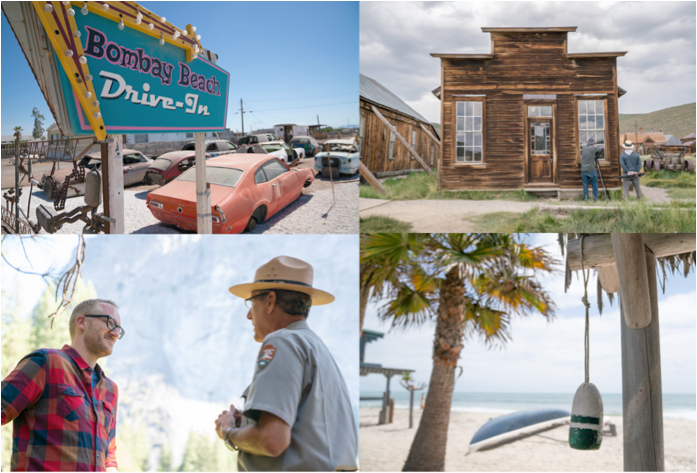 KCET, the nation’s largest independent public television station, has announced the return of its history series Lost L.A., a co-production with the University of Southern California Libraries. In its third season, which is sponsored by Union Bank, Lost L.A. uncovers the dreams that built modern-day Los Angeles through documents, photos and other rare artifacts from the region’s libraries and archives. Lost L.A. premieres on Tues., Oct. 9 at 8:30 p.m. on KCET in Southern California.

Hosted by public historian Nathan Masters of USC Libraries, Lost L.A. brings the primary sources of Los Angeles history to the screen in surprising new ways. This new season of Lost L.A. unlocks the untold history behind the fantasy of California, from the sunny youthfulness of its beaches to the iconic scenery of Yosemite.

“We’re excited to bring a third season of Lost L.A. to our viewers,” says Juan Devis, KCETLink’s Chief Creative Officer. “With this season we are exploring the far reaching impact L.A.’s past has had beyond the city’s borders. We discover the profound connections of Los Angeles to neighboring regions like Yosemite and Palm Springs. The ebb and flow of Angelenos visiting these areas has helped to shape their identities, and created powerful links to the lives of its many residents.”

“This new season of Lost L.A. is very much about Los Angeles as a source of imagination and inspiration for California and beyond,” said Catherine Quinlan, Dean of the USC Libraries. “Our KCET partners have done remarkable work in tracing the historical relationships of our city to West Coast myth-making, global cultural exports, and the poetry and politics of natural landmarks across the state. I’m grateful for their dedication to telling—with vital depth and creativity—the essential stories that live in the collections of our libraries and archives.”

“Union Bank has a long legacy of serving the communities in Los Angeles, as such we are pleased to continue our support for Lost L.A. which does a wonderful job of telling the unique stories that highlight the region’s people as well as its history and heritage,” said Patrick Nygren Regional President Los Angeles and Central Coast Division, MUFG Union Bank.

The episodes will be telecast as follows (subject to change):

Yosemite National Park has seen some drastic changes since its birth as a park and preserve in 1864. From a scenic land maintained by indigenous peoples to its emergence as a tourist attraction, Yosemite Valley has become a postcard for the natural beauty of the state. But Californians have long fought over how to manage the Park that currently is a site of conflict over humanity’s relationship with nature.

California’s deserts have sparked the imaginations of millions of people around the world including real estate developers that have created desert utopias like Palm Springs and Las Vegas. From the famously alien landscape of Joshua Tree National Park to the wide expanses of seemingly empty land, the desert has been seen as a place of reinvention and a blank slate to create dreams.

One of Southern California’s great international exports has been its beach culture. Surfers, bodybuilders, and acrobats taught Californians how to have fun and stay young at the beach.

Three California ghost towns are explored. Bodie was a Mono County gold mining settlement that was preserved in time while Llano Del Rio was a socialist utopian community in the Mojave Desert. Finally, Zzyzx was a former health spa on the way to Las Vegas. Some California dreams succeeded, giving birth to metropolitan regions in the state’s north and south. Other dreams failed, leaving nothing but ruins.

Venice Beach boasts a rich, multilayered history. From its origins as a themed seaside resort to its international fame as a countercultural hub, explore Abbot Kinney’s original Venice of America development, the community of Beat poets who called Venice home and how the commercial renaissance has impacted the historically African-American neighborhood of Oakwood.

Los Angeles has long been the place where you can simply imagine something— and build it.  This tradition can be from any time period, any locale, ordinary or exotic, real or fantasy. For instance, in nearby Anaheim, Walt Disney’s Imagineers created the intricately themed, immersive experience that is Disneyland.

Lost L.A. is supported by The Ralph M. Parsons Foundation and other generous institutional funders.

For more information about Lost L.A. and to watch episodes online, visit kcet.org/LostLA.

*KCET and Link TV are expected to merge with PBS SoCal, subject to regulatory approvals.

On-air, online and in the community, KCET plays a vital role in the cultural and educational enrichment of Southern and Central California. KCET offers a wide range of award-winning local programming as well as the finest public television programs from around the world. Throughout its 52-year history, KCET has won hundreds of major awards for its local and regional news and public affairs programming, its national drama and documentary productions, its quality educational family and children's programs, its outreach and community services and its website, kcet.org. KCET is a donor-supported community institution. For additional information about KCET productions, web-exclusive content, programming schedules and community events, please visit kcet.org. KCET is a part of the KCETLink Media Group. Select original programming from KCET is also available for streaming on Apple TV and Roku platforms.

ABOUT USC LIBRARIES AND L.A. AS SUBJECT

The USC Libraries actively support the discovery, creation, and preservation of knowledge at the University of Southern California and beyond. The libraries serve as host institution for L.A. As Subject, an association of more than 230 libraries, cultural institutions, official archives, and private collectors dedicated to preserving and telling the sometimes-hidden histories of the Los Angeles region. The history of Los Angeles as a Pacific Rim metropolis is among the USC Libraries’ prominent collections strengths.

As of June 30, 2018, MUFG Union Bank, N.A. operated 355 branches, comprised primarily of retail banking branches in the West Coast states, along with commercial branches in Texas, Illinois, New York and Georgia, as well as 22 PurePoint Financial Centers.  We provide a wide spectrum of corporate, commercial and retail banking and wealth management solutions to meet the needs of customers.  We also offer an extensive portfolio of value-added solutions for customers, including investment banking, personal and corporate trust, global custody, transaction banking, capital markets, and other services.  With assets of $123.8 billion, as of June 30, 2018, MUFG Union Bank has strong capital reserves, credit ratings and capital ratios relative to peer banks.  MUFG Union Bank is a proud member of the Mitsubishi UFJ Financial Group (NYSE: MUFG), one of the world’s largest financial organizations with total assets of approximately ¥299.1 trillion (JPY) or $2.7 trillion (USD), as of June 30, 2018. The corporate headquarters (principal executive office) for MUFG Americas Holdings Corporation, which is the financial holding company, and MUFG Union Bank, is in New York City. The main banking office of MUFG Union Bank is in San Francisco, California.