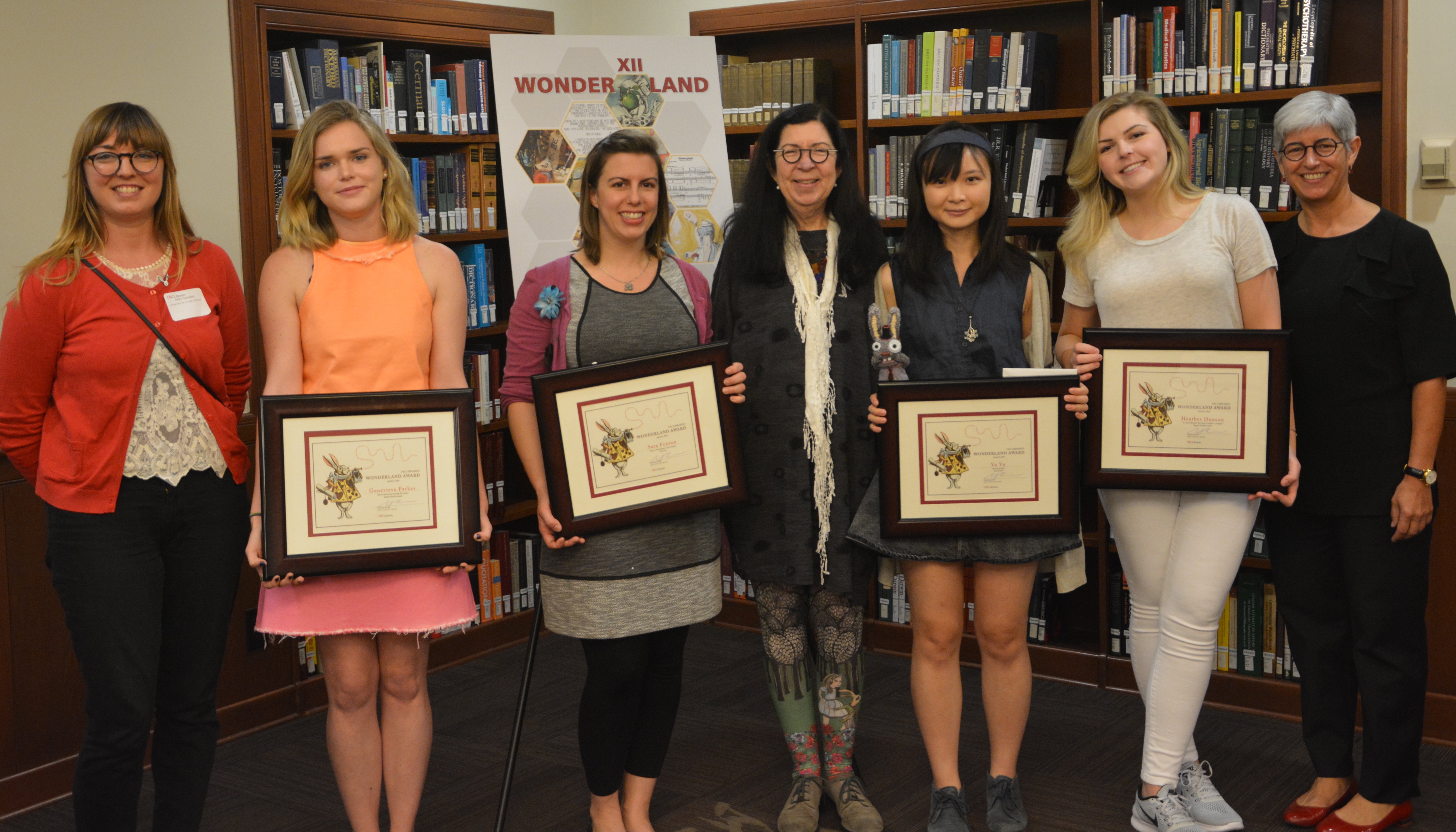 Sara Fenton took first prize in the twelfth-annual USC Libraries Wonderland Award competition with a digital puppet theater called “Alice in Dohenyland—Pool of Tears.” She beat out twenty-eight other imaginative submissions by students from USC and other participating institutions around Southern California.

Fenton, a graduate student in the USC School of Cinematic Arts, used an ornate but nonfunctioning drinking fountain in Doheny Memorial Library as the stage for digitally reenacting the pool of tears chapter from Lewis Carroll’s Alice’s Adventures in Wonderland. She constructed a miniature theater around the fountain with a curtain that the viewer sticks their head through to view precisely projection-mapped images of the story.

“I was struck by Carroll’s proclivity toward the repurposing of everyday objects into scenes of whimsy and fancy,” she said in accepting the award at a ceremony in Doheny on Thursday, April 21. “In Alice’s adventures, we get to see the world from different perspectives of size. I approached Doheny Library with that in mind, repurposing the area and adapting my video installation to the site.”

The second-place prize went to another Cinematic Arts student, Yu Yu, for “Not Just a Book.” The stop-motion animation film follows the travails of the March Hare, known popularly for his antics at the surreal tea party. Yu depicts the rabbit (in reality a puppet she made), as an exasperated caretaker of a book in which the pages keep morphing into characters from the Alice books, and scurry away from him.

In welcoming the crowd to the ceremony, Dean Catherine Quinlan of the USC Libraries recognized the inspirational support of the annual competition’s founder, Linda Cassady.

“Since founding this event in 2005, Linda has made possible the Wonderland award and shaped its direction,” Quinlan said. “And the Cassadys’ commitment goes far beyond this award. George and Linda continue to help us expand the collection, and they contribute their time and effort to ensure that it’s known the world over. They are incredible advocates for USC’s impact and influence in the world of Carroll studies.”

The Wonderland Award is an annual multidisciplinary competition showcasing the creative and interpretive talents of students from USC and other Southern California institutions as they transform the life and writing of Lewis Carroll into new creative and scholarly works. All student submissions become a permanent part of the G. Edward Cassady, M.D., and Margaret Elizabeth Cassady, R.N., Lewis Carroll collection, which George Cassady donated to the USC Libraries in 2000 and from which students draw inspiration and raw material for their Wonderland entries. The libraries have published a series of anthologies—titled the Liddell Books—highlighting the submissions.